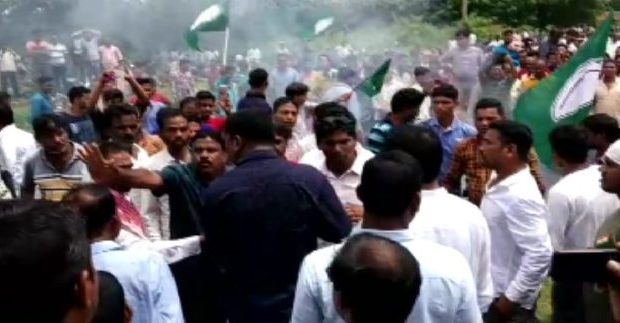 in District Diary August 29, 2018 Comments Off on BJD MLA attacked in Khordha 947 Views

Khordha:28/8/18: Tension ran high at Kusapala here after Begunia BJD MLA Prashant Jagdev, who has made headlines for all the wrong reasons in the past, had a face-off with a group of anti-activists today.

The situation turned ugly after the anti-activists threw plastic chairs and water pouches at him during a protest meeting staged by the former Kusapala.

Sources said the activists had planned to take out a protest rally against the legislator from Sarua to Begunia. However, the rally could not be held due to a prohibitory order under Section-144 of CrPC imposed in the locality. The anti-group later held a protest meeting at Kusapala.

When the MLA arrived at the meeting venue along with a few supporters, the activists opposed it and threw plastic chairs and water pouches at him. Later, police reached and rescued the legislator from the spot.

Meanwhile, a plaotoon of police force has been deployed at the site to avoid any further untoward incident.

2018-08-29
Editor in chief
Previous: Modi government has given a big gift to the central government employees and pensioners
Next: NALCO announces record 114% dividend amounting to Rs. 1102 crore for 2017-18, highest ever since inception