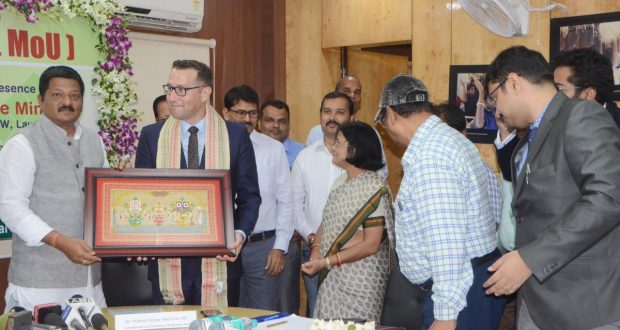 Bhubaneswar:28/8/18; In a bid to make Odisha malaria-free the Health department today signed a Memorandum of Understanding (MoU) with an America-based agency ‘Malaria No More’ and another Indian agency ‘Malaria Elimination Trust’ in the presence of Health Minister Pratap Jena at the State Secretariat here today.

On the occasion Jena said, “The state government is necessary and successful steps to eradicate malaria. As the vector-borne disease has gone down in the state, the agencies will be able to make Odisha malaria-free.”

Jena also claimed that the impact of malaria has gone down to 85 per cent due to the successful implementation of the state government’s ‘Daman’ programme. Besides, the World Health Organisation (WHO) has highly praised Odisha government’s anti-malaria initiatives.

As malaria is a great challenge to combat alone, the state government hopes to eradicate malaria from the Odisha by joining hands with American agency ‘Malaria No More’ and Indian agency ‘Malaria Elimination Trust’.

Apart from helping the State Government in chaking out strategy for malaria eradication, the two agencies will also prepare roadmap for massive public awareness and will work towards maintaining coordination with both government and non-government agencies.

It may be mentioned here that, the state government under its ‘Daman’ programme has distributed 1.13 crore medicated mosquito-nets to the people across the state while sensitising people through various mediums.

As per reports, while 395004 people were hit with malaria in Odisha in 2014, 89 lost their lives. Similarly, in 2015, 436792 were afflicted while 80 lives were claimed, 449697 were affected and 77 died in 2016. This apart, in 2017, 352140 were affected by malaria and 24 died.Apart from the Odisha Health Minister, Health Commissioner-cum-Secretary Pramod Kumar Meherda, Health Director Dr Brajakishore Brahma, ‘Malaria No More’ CEO Martin Enlund and ‘Malaria Elimination Trust’ trustee Dr Koushik Sarkar were also present on the MoU signing occasion.

2018-08-28
Editor in chief
Previous: Odisha has come up to second position in implementation of the AMRUT scheme
Next: Moderate earthquake was felt in several parts of Odisha