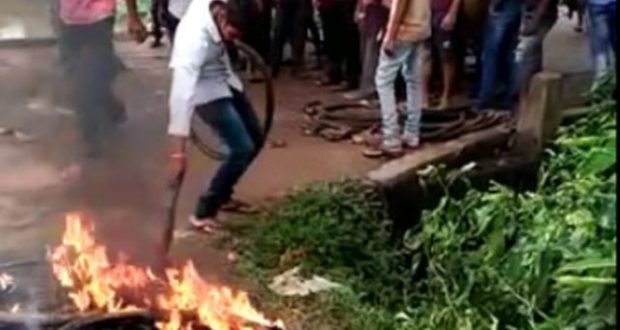 Tension has mounted up in Narendrapur gram panchayat

in District Diary August 27, 2018 Comments Off on Tension has mounted up in Narendrapur gram panchayat 1,399 Views

Situation is tense. We are trying to bring thing under control. Police forces from Nemalo, Salipur and Nischnitakoili and Jagatpur police stations have rushed to the spot to avert breach of peace, said Cuttack Rural Superintendent of Police, Madhabanand Sahu.

Two groups of people from Gopalpur and Kakudiapada villages were involved in the clash. Exact cause behind the disturbances is yet to be ascertained, he said.

With mob resorting to road blockade and brick-bating, situation has taken a disturbing turn. Police forces are yet to arrive at the spot of disturbances following the road blockade. There are reports of policemen injured following stone-pelting by the mobs, sources said

2018-08-27
Editor in chief
Previous: Water Tank Collapses: Two Hurt
Next: Justice Ranjan Gogoi will be the next Chief Justice of India