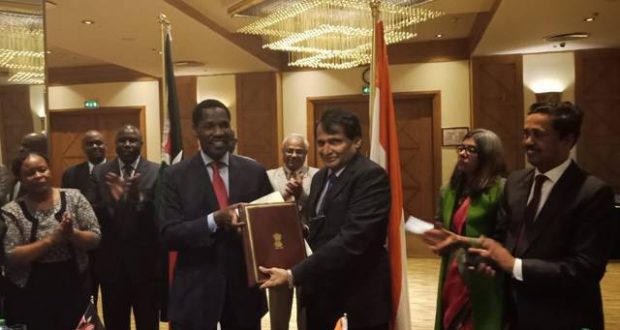 An Agreed Minutes of the Meeting was signed by both Ministers. A meeting ofIndia-Kenya Joint Business Council was held on the side-lines of the Joint Trade Committee meeting. In his address to the Kenyan and Indian business leaders, Suresh Prabhu emphasized on research and design in products specific to Kenyan needs and urged Indian businesses to carry out a market study to identify priority areas for bilateral cooperation.

The Commerce Minister also interacted with the members of the Indian diaspora and apprised them about the various developmental initiatives and achievements of the Government of India.

During the visit, Suresh Prabhu, called on the Kenyan President, Uhuru Kenyatta, and Deputy President, Mr. William Ruto. The Commerce Minister, Suresh Prabhu, was accompanied by senior officials of the Ministry of Commerce & Industry and a business delegation.

India and Kenya are Indian Ocean neighbours and share longstanding trade and people-to-people contacts. At present, India is one of Kenya’s largest trade partners and the second largest foreign investor in Kenya. Indians are the third-largest group of tourists to Kenya. The last meeting of Joint Trade Committee was held in New Delhi in February 2015.