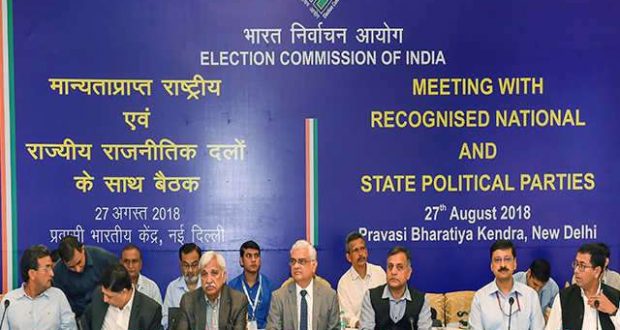 Election Commission of India holds a meeting with all the recognised National and State Political Parties on various electoral reforms.

2. Chief Election Commissioner observed that political parties are initiators of reforms and act as agents for mobilizing people and electors, enabling them to express their political choice. The Commission considers political parties as the most important stakeholders in its endeavour to strengthen electoral democracy. Commission further observed that the Commission is uniquely privileged and honoured to enjoy trust and confidence of people, media and all political parties, because the Commission is having an open door policy treating all with respect, impartiality and fairness. Commission urged the representatives of political parties to put forward their views on important issues such as transparency in political funding, media management including that of social media, bringing in trust and confidence of all stakeholders in the voting and counting process and as such strengthening democracy in our country while setting an example globally. Chief Election Commissioner mentioned about the challenge faced by all the democracies globally in view of the new media and advancements in information technology and the Commission is taking initiatives to prevent such interference. Commission sought suggestions and support of political parties to comprehensively meet these and other challenges for ensuring free and fair elections.

3. All the parties assured the Commission that they would extend the requisite support in the process of preparation of electoral roll. They also suggested sharing with them copies of the list of deletion in electoral roll. Some parties also suggested to strengthen the system of Booth Level Officers for better preparedness of electoral roll. Some parties requested for avoiding the festival season for roll revision. Commission has already taken this into account and revision in all states excluding poll going states, will start from 1st September itself for 2 months which is more than usual one month period

. 5. Political parties expressed concern on Paid News and suggested to make it an electoral offence to curb this menace.

6. Political parties also asked the Commission that on the lines of Doordarshan and AIR, the free airtime to political parties should be provided on private media for electoral campaigns.

7. All parties appreciated the Commission’s effort in making elections inclusive for all especially PwD electors. They also lauded the steps taken under SVEEP to enhance the awareness and participation of electors.

8. Some political parties requested the Commission to fix a certain % of VVPAT slips counting to enhance the trust in EVM. Commission assured them that it is being looked into with input from experts. Commission also informed that any candidate may approach the Returning Officer concerned for the specific count of VVPAT of a polling station under the law already available. 9. They suggested for a ceiling on expenditure

9. They suggested for a ceiling on expenditure limit for council elections, as suggested by the Commission.

10. All political parties welcomed the discussion on taking the steps for enhancing the role of women in the Electoral process.

11. For no campaign period, they suggested for more measures in view of current electronic and digital environment. Commission assured all the political parties that each of the suggestions will be looked into and will be responded by Commission in time bound manner.

2018-08-27
Editor in chief
Previous: 42.33 lakh children will be given doworming tablets on the occasion of National Deworming Day
Next: Odisha Chief Minister announced a cash award of Rs 1.5 crores for Dutee Chand on winning the Silver Medal in 100-meter event