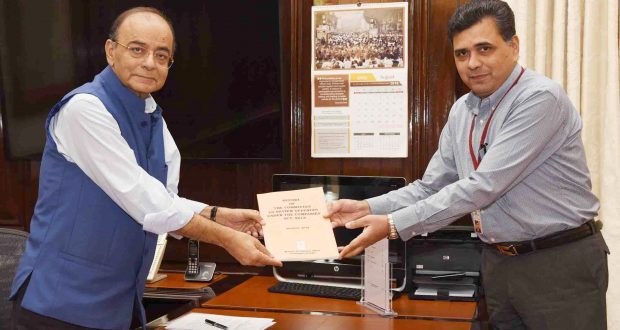 Newdelhi:27/8/18:The Committee constituted by Government of India in July 2018  to review the existing framework dealing with offences under the Companies Act, 2013 and related matters and make recommendations to promote better corporate compliance, has submitted its report here today. The report was presented to the Union Minister for Finance & Corporate Affairs, Shri Arun Jaitley by Secretary, Ministry of Corporate Affairs, Shri Injeti Srinivas, who chaired the committee.

The Committee undertook a detailed analysis of all penal provisions, which were then broken down into eight  categories based on the  nature of offences.  The Committee recommended that  the existing rigour  of the law should continue for serious offences, covering six categories, whereas for lapses that are essentially technical or procedural in nature, mainly falling under two categories may be shifted to in-house adjudication process. The Committee observed  that this would serve the twin purposes promoting of ease of doing business and  better corporate compliance.  It would also reduce the number of prosecutions filed in the Special Courts, which would, in turn, facilitate  speedier disposal of serious offences and  bring serious offenders to book.   The cross-cutting liability under section 447, which deals with corporate fraud, would continue to apply wherever fraud is found.

The report, inter alia, makes recommendations for de-clogging the National Company Law Tribunal (NCLT) through significant reduction in compounding cases before the Tribunal. In addition, the report also touches upon certain essential elements related to corporate governance such as declaration of commencement of business, maintenance of a registered office, protection of depositors’ interests, registration and management of charges, declaration of significant beneficial ownership, and independence of independent directors.

The main recommendations of the Committee are as follows:

(i)    Restructuring of Corporate Offences to relieve Special Courts from adjudicating routine offences:

(a)      re-categorization of 16 out of the 81 compoundable offences by shifting them from the jurisdiction of special courts to an in-house E-adjudication framework wherein defaults would be subject to levy of penalty by the authorised adjudicating officer (Registrar of Companies);

(b)      remaining 65 compoundable offences to continue under the jurisdiction of special courts due to their potential misuse;

(c)     instituting a transparent online platform for E-adjudication and E-publication of orders; and

(d)   necessitating a concomitant order for making good the default at the time of levying penalty, to achieve better compliance.

(a)    enlarging the jurisdiction of the Regional Director with enhanced pecuniary limits for compounding of offences under section 441 of the Companies Act 2013 (the Act);

(b)   vesting in the Central Government the power to approve the alteration in the financial year of a company under section 2(41); and conversion of public companies into private companies under section 14 of the Act.

(a)    re-introduction of declaration of commencement of business provision to better tackle the menace of ‘shell companies’;

(b)   greater disclosures with respect to public deposits, particularly in respect of transactions exempted from the definition of public deposits under section 76 of the Act to prevent abuse and harming of public interest;

(c)    huge reduction in time-limit for filing documents related to creation, modification and satisfaction of charges and stringent penal provisions for non-reporting;

(d)   once a company obtains restrictions under section 90(7) relating to significant beneficial ownership, in respect of shares whose ownership remains undetermined, such shares should be transferred to the Investor Education and Protection Fund if rightful owner does not claim ownership within a year of such restrictions;

(f)    holding of directorships beyond permissible limits to trigger disqualification of such directors; and

(g)   imposition of a cap on independent director’s remuneration in terms of percentage of income in order to prevent any material pecuniary relationship, which could impair his independence on the board of the company.