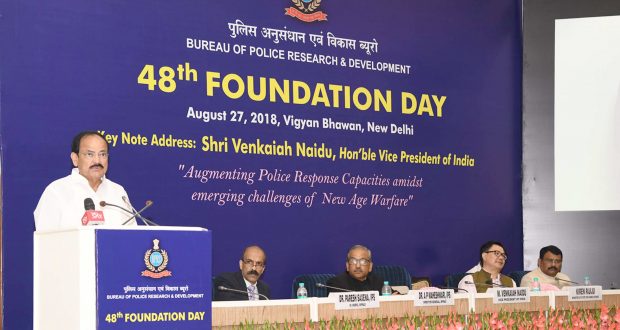 The Vice President, Shri M. Venkaiah Naidu addressing the gathering at the 48th Foundation Day of Bureau of Police Research and Development, in New Delhi on August 27, 2018. The Minister of State for Home Affairs, Shri Kiren Rijiju and other dignitaries are also seen.

Newdelhi:27/8/18:The Vice President of India, Shri M. Venkaiah Naidu has said that the era of New Age cyber warfare, and the new enemy can be combated only through the power of knowledge. He was addressing the gathering on the occasion of 48th Foundation Day of Bureau of Police Research and Development (BPR&D), here today. The Minister of State for Home Affairs, Shri Kiren Rijiju and other dignitaries were present on the occasion.

The Vice President cautioned against the cyber attacks by hackers working over the Internet thousands of miles away and asked police to be equipped to handle attacks that jeopardize national security. He further asked the BPR&D to evolve best practices, policies and procedures in policing to combat emerging new age National Security threats. The Vice President said that knowledge and competence of our police forces and the ability to innovate, improvise and implement will be critical in strengthening national security. We need a “Surakshit Bharat” as much as a “Samruddh Bharat” and we cannot have a “Surakshit Bharat” without a “Saksham Bharat”, he added. 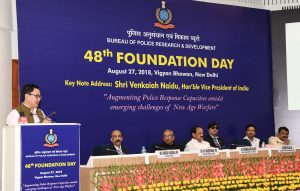 The Minister of State for Home Affairs, Shri Kiren Rijiju addressing the gathering at the 48th Foundation Day of Bureau of Police Research and Development, in New Delhi on August 27, 2018.

The Vice President said that Indian Government has taken various measures to prevent cyber attacks and stressed on the need to augment police response capacities. He further said that the set up for combating the new enemy in Cyber Space can no longer be housed within the walls of a seemingly secure single government agency.The Vice President called for a reorientation of the existing paradigm and said that all security agencies must work in close coordination and also with the private sector manning to establish a foolproof ecosystem.The Vice President said that the Government & private sector must establish joint mechanisms to protect the police a force against the future challenges, including, the threats of modern warfare. All police forces of the country have to equip themselves with the cyber forensic techniques and knowledge to counter a cyber-attack or investigate a cyber-crime, he added

2018-08-27
Editor in chief
Previous: Children and women of all age groups from across the State tie Rakhi to Naveen Patnaik
Next: India – Kenya Joint Trade Committee meeting held in Nairobi