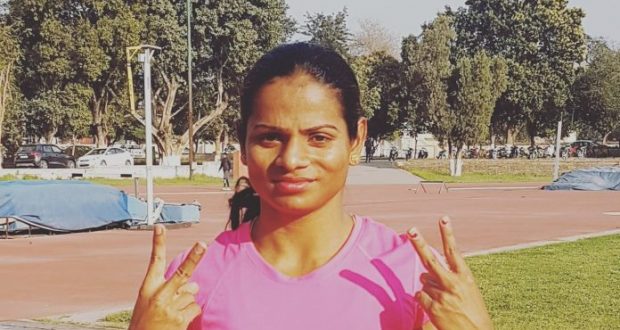 in Sports August 26, 2018 Comments Off on Sprinter Dutee Chand brought laurel for Odisha won silver in the women’s 100-metre 884 Views

Bhubaneswar: 26/8/18:Ace sprinter Dutee Chand brought laurel for Odisha after she won silver in the women’s 100-metre in the ongoing Asian Games at Jakarta on Sunday evening.

Dutee finished second with a timing of 11.32 seconds.

Earlier in the day, Dutee had qualified for the women’s 100-metre final after finishing third with a timing of 11.43 seconds in the semi-final.

The ace sprinter had qualified for the Asian Games after her sterling show in the Inter-State Athletics Championships in Guwahati on June 29 this year where she broke her own national record clocking 11.29 seconds in the semi-finals before winning the final in 11.32 seconds, way ahead of the Jakarta Asian Games qualifying mark of 11.67 seconds.

Dutee was involved in a battle with the International Association of Athletics Federation (IAAF) after she was barred from the Commonwealth Games in 2014 as her testosterone level exceeded the guidelines laid down for female athletes.

2018-08-26
Editor in chief
Previous: Odisha School College Teachers’ and Employee’s United Forum observe the Guru Divas as Black Day
Next: Pace of development has been hit in Odisha owing to social exclusion:Rajiv Kumar