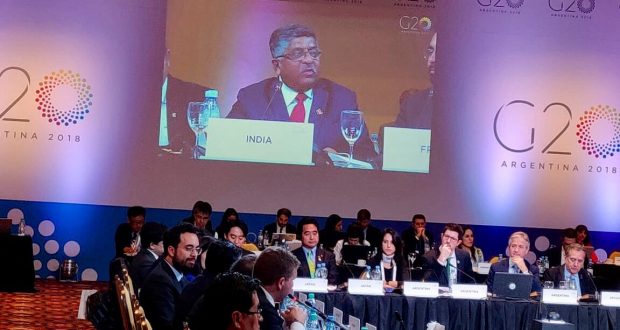 in International August 26, 2018 Comments Off on G20 member nations to promote policies that bridges all forms of digital divide 814 Views

Argentina:26/8/18:At the G20 Digital Economy Ministerial Meeting in Salta, in the north-west of Argentina, G20 ministers and senior officials issued a declaration that reflects the G20’s commitment towards promoting “policies and actions that catalyze digital transformations. The Digital Economy Ministerial Meeting, held on 23-24 August, was attended by 33 heads of delegation- Ministers, senior officials and representatives from invited countries and international organizations, like EU, UNCTAD, ITU etc. India was represented by Union Minister for Electronics and IT & Law and Justice,Sh. Ravi Shankar Prasad.

Building on the contributions of the G20 Digital Economy Task Force, delegates deliberated upon efforts to create conditions that help governments, the private sector and civil society maximize the benefits and confront the challenges posed by technological progress. The other focus area of the meeting was digital inclusion, in particular the gender divide. Other related issued such as Digital government, digital infrastructure and measuring the digital economy were also deliberated.

Addressing the Plenary of the G-20 Digital Economy Ministerial meeting, Sh. Prasad said that India’s digital story is a story of hope and growth; of opportunities and profits. But above all it is a story of digital inclusion and empowerment. Digital India is a mass movement today touching the lives of a billion people. Minister Prasad said that he was very assured to note that an important theme of the meeting was bridging the gender divide adding that gender empowerment was an important focus for his government.

Highlighting the enormous scale of India’s digital infrastructure that included 1.21 billion mobile phones, of which 450 million are smartphones, nearly 500 million internet subscriber and an ever increasing broadband availability being supported by optical fibre connectivity in 250,000 village clusters, Minister Prasad said that the success of Digital India programme lay in the conscious efforts to bridge the digital divide and promote digital inclusion, based upon technology which is low cost, affordable, developmental and which fosters empowerment and inclusion.