Top Headlines
Home » State News » Doctors must be trained to be more sensitive to the sufferings of patients: Vice President 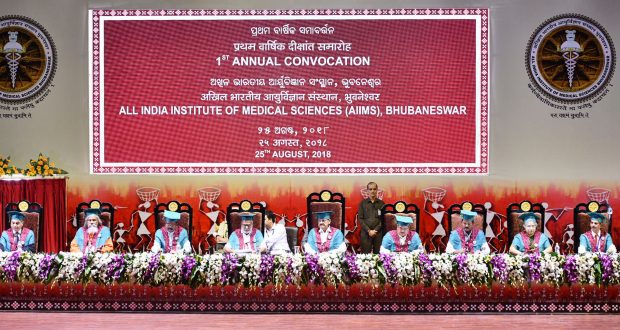 Doctors must be trained to be more sensitive to the sufferings of patients: Vice President

in State News August 25, 2018 Comments Off on Doctors must be trained to be more sensitive to the sufferings of patients: Vice President 808 Views

Bhubaneswar:25/8/18:The Vice President of India, Shri M. Venkaiah Naidu has said that doctors must be trained to be more sensitive to the sufferings of patients. He was addressing the first convocation of All India Institutes of Medical Sciences, in Bhubaneswar, Odisha today. The Governor of Odisha, Shri Ganeshi Lal, the Union Minister for Health & Family Welfare, Shri J.P. Nadda, the Union Minister for Petroleum & Natural Gas and Skill Development & Entrepreneurship, Shri Dharmendra Pradhan, the Minister for Health & Family Welfare, Odisha, Shri Pratap Jena and other dignitaries were present on the occasion.

The Vice President lauded the contributions of former Prime Minister, Shri Atal Bihari Vajpayee, who laid foundation for the institution and remembered his memories with the leader. 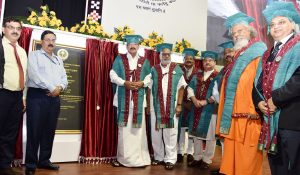 The Vice President, Shri M. Venkaiah Naidu unveiling the plaques for laying foundation stones for three important buildings at the first Convocation of All India Institutes of Medical Sciences, in Bhubaneswar, Odisha on August 25, 2018.

The Vice President asked the doctors to be abreast with modern methods and latest trends in their fields of specialization. He further said that they should focus on disciplines such as family and community medicine. This will help in providing comprehensive health care for people of all ages in families and communities, he added.The Vice President said that schemes such as ‘Ayushman Bharat Yojana’ or the ‘National Health Protection Scheme’ will be a game-changer in terms of accessing healthcare services in India. He asked doctors to give their best to make these schemes a success so that no needy or deserving person is denied medical treatment at the right time.

The Vice President said that Medical Education curriculum has to be constantly updated by including the latest developments and methods of treatment. 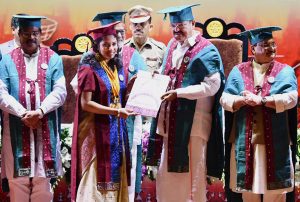 The Vice President, Shri M. Venkaiah Naidu presenting Medals to the Students at the first Convocation of All India Institutes of Medical Sciences, in Bhubaneswar, Odisha on August 25, 2018.
The Governor of Odisha, Shri Ganeshi Lal and the Union Minister for Health & Family Welfare, Shri J.P. Nadda are also seen.

The Vice President said that there is shortage of physicians, other specialists and nurses in the country and stressed on the need to increase the number of medical colleges and also expand medical services to every nook and corner of the country.  The government is doing its best in this regard, the corporate sector and NGOs must come forward to supplement the efforts of the government, he added.

The Vice President said that it is a matter of concern that the absence of qualified medical practitioners is making people to go to quacks. We need to overcome the acute shortage of health providers as also the infrastructure in rural areas, he added.Highlighting on the need to accord priority to primary healthcare and tertiary healthcare, the Vice President said that there is a need to increase the number of doctors available at health care centres residing in rural areas. It should be mandatory for young doctors to serve at least two-three years in rural areas before considering promotions for them, he added.