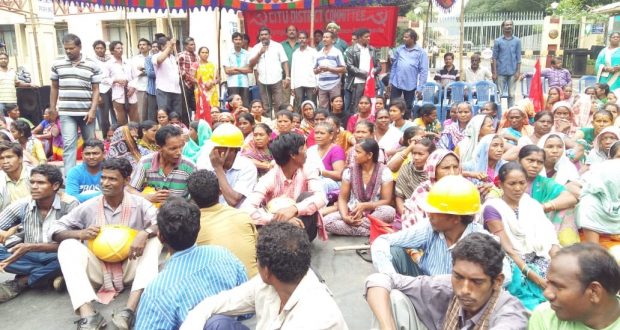 Rayagada:24/8/18: Production has come to halt at the JK Paper Mill in Jaykaypur of Rayagada district after contractual labourers launched an indefinite cease work agitation today closing all the gates.

Over 3,000 contractual workers led by JK Paper Mill Employees Union and Contractual Workers’ Union under the banner of CITU District Committed came together with their 14-point charter of demands today and sat on dharna in front of the main gate.

The agitating workers locked all the gates and resorted to cease work starting from 6 am in the morning.

District administration has deployed 5 platoons police force in the plant premises to avoid any untoward situation.

The workers resorted to the protest after a talk between labour leaders and plant authorities at the Rayagada Sub-Collector’s office remained inconclusive yesterday.

The agitating workers are demanding pay hike and regularisation of their jobs since long.