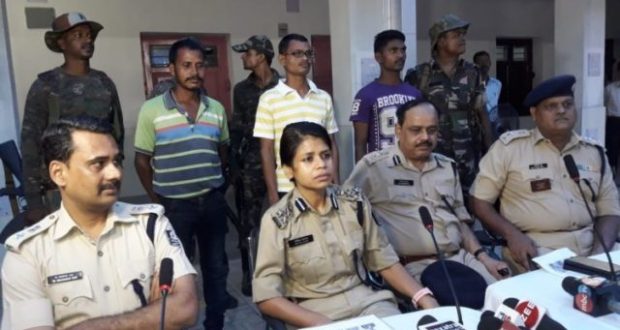 in District Diary August 24, 2018 Comments Off on Four Maoists surrendered before police in Rourkela 1,379 Views

Rourkela:24/8/18: As many as four Maoists surrendered before police in Odisha’s Rourkela today citing deviation of the Maoist organisation from its ideologies as the reason of laying down arms.

The surrendered have been identified as Premchand Munda (23), Motu Bading (31), Sushil Munda and Gaunia. According to police sources, Premchand, hailing from Sundargarh, was working in the Maoist organisation for the last 15 years and involved in many criminal activities. He was carrying a cash reward of Rs 4 lakh on his head.

Similarly, Motu of Jharkhand had escaped from Chaibasa Jail and was carrying a cash reward of Rs one lakh on his head.

Sushil and Gaunia were also carrying a bounty of Rs one lakh each.

2018-08-24
Editor in chief
Previous: Union Civil Aviation Minister Suresh Prabhu advise all airlines to introduce a direct flight from Bhubaneswar to Surat
Next: JSPL Honoured with ‘CSR Project of the Decade Award’ 2018