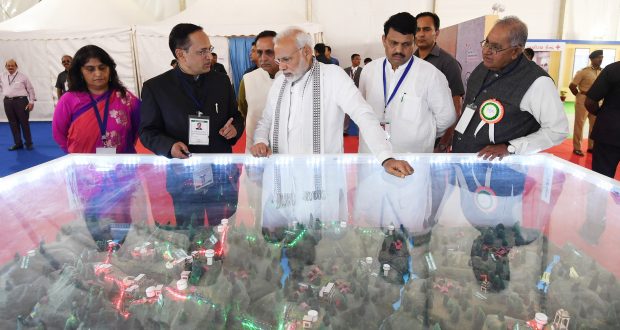 The Prime Minister, Shri Narendra Modi visiting an Exhibition, on the occasion of collective e-Gruhpravesh of beneficiaries of Pradhan Mantri Awaas Yojana, at Jujwa village of Valsad district, Gujarat on August 23, 2018. The Chief Minister of Gujarat, Shri Vijay Rupani is also seen.

Gujarat:23/8/18:The Prime Minister, Shri Narendra Modi, today joined thousands of people in witnessing the collective e-Gruhpravesh of beneficiaries of the Pradhan Mantri Awaas Yojana (Gramin) at a large public meeting in Jujwa village of Valsad district in Gujarat. More than one lakh houses were handed over to beneficiaries, across 26 districts of the State. Beneficiaries in several districts were connected through a video link to the main event, and the Prime Minister interacted with some of them.

Speaking on the occasion, the Prime Minister noted that the festival of Raksha Bandhan is approaching. He said he is satisfied that over a lakh women have got a house in their name, on this occasion, as a gift on Raksha Bandhan. He said a new house brings with it, new dreams; and a new collective enthusiasm in the family to work hard to achieve those dreams.

Observing that the houses that were visible today during the e-Gruhpravesh seemed to be of excellent quality, he said this became possible only because there are no middlemen involved. He reiterated the Union Government’s vision to ensure “Housing for All” by 2022.

The Prime Minister said that the discourse had long been about politicians getting fancy homes built. He said now this discourse has changed to the poor getting their own homes.

Describing the Astole Water Supply Scheme, for which the Foundation Stone was laid today, as an engineering marvel in the making, the Prime Minister said that clean drinking water saves people from diseases.

The Prime Minister explained how the Government is seeking to transform the lives of the poor by providing them access to their own house, to electricity, to clean drinking water, and to clean cooking fuel.