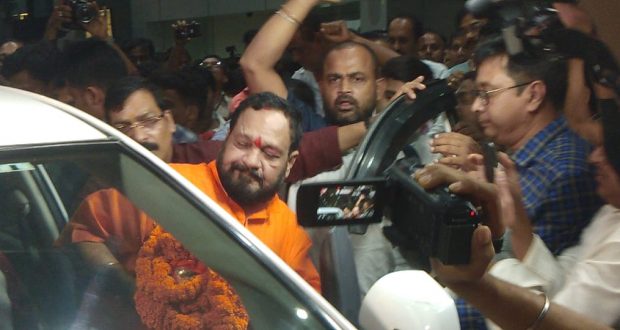 The ashes were brought by the state BJP president Basanta Panda.

The ashes were later taken in a huge procession to the BJP’s state headquarters office where they will be kept for people to pay their tributes. The party office would remain open the whole night.

On Thursday morning, the ashes would be taken in a procession to Puri via Uttara Chhak and the Old Bhubaneswar-Puri Road. After arriving in Puri, the party leaders will immerse the ashes following traditional rituals.

On Friday, an all-party meeting will be organized at the Exhibition Ground in the memory of the Late Prime Minister.

Talking to mediapersons, BJP state vice-president Samir Mohanty said the ashes would be immersed in Mahanadi, Baitarani, Brahmani and Rushikulya rivers in phases.

Besides, there would be prayer meetings at the zone level, he added.

2018-08-22
Editor in chief
Previous: Much-awaited Pokhariput overbridge will be thrown open to the public tomorrow
Next: Bhubaneswr:22/8/18:245 Odisha Fire Service personnel & 63 boats air-lifted by IAF_MCC & deployed inKeralaFloodRelief since 19 Aug. Since 1999 Super Cyclone, Odisha has emerged as a model in disaster preparedness