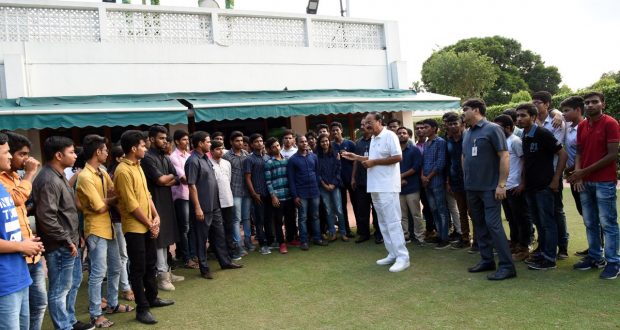 Newdelhi:21/8/18:The Vice President of India, Shri M. Venkaiah Naidu has asked the Students to take active part in the process of nation building. He was interacting with the fresh Students from different centres of Jawaharlal Nehru University, here today. With more than 65% of the population below the age of 35, it is essential for a country like India to realize its demographic dividend to become an economic superpower, he added.

The Vice President explained the students about the parliamentary system and the role and functioning of both the houses of Parliament. He also stressed on the importance of committees such as Parliamentary Standing Committee and informed them about crucial Parliamentary procedures. Indian Parliamentary system is the best and our three-tier structure of governance help the governments implements programmes, he added.

The Vice President asked the Students to develop the habit of living with nature. We need to protect nature and culture for a better future, he added.

Saying that ‘Share and Care’ are the core values of Indian Philosophy, the Vice President also asked them to develop the feeling of oneness and be empathetic to needs and sufferings of fellow citizens.

The Vice President asked them to take active role in welfare of their native places adding that one should never forget their Janmabhoomi. He also asked the students to remember the Mother, Mother tongue, Guru.

The Vice President advocated that a leader should possess four C’s – Character, Calibre, Capacity and Conduct. Four D’s for the youth – Discipline, Determination, Dedication and Devotion to the cause are vital for national development, he added.

Be proud to be called as Bharateeya and live as Bharateeya, the Vice President advised. He also asked students to aim and dream high and also work hard to realize the dreams.More than 250 Students from JNU have participated in the interaction and the Vice President has personally shown the Uparashtrapati residence to the Students.

2018-08-21
Editor in chief
Previous: President to inaugurate “International Buddhist Conclave 2018” on 23rd August, 2018
Next: NTA releases the schedule of examinations to be conducted by it between December 2018 to May, 2019