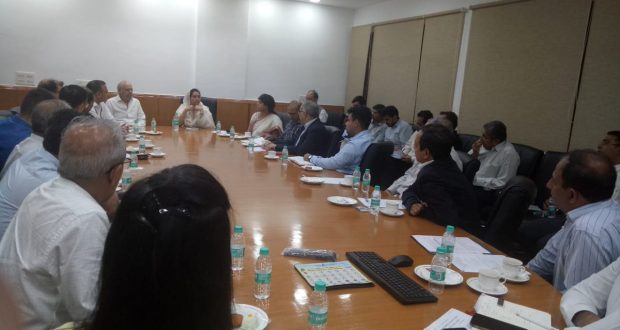 in National August 21, 2018 Comments Off on Smt Harsimrat Badal meets Industry leaders to request assistance for people of Kerala 758 Views

Newdelhi:21/8/18;Union Minister for Food Processing Industries met with food processing industry leaders late evening yesterday to plan a strategy for assistance to be provided to people of Kerala. The meeting was attended by representatives from companies like ITC, Coca Cola, Pepsi, Hindustan Unilever, Dabur, MTR, Nestle, Britannia, Maricoamong others. The Minister said “It is time to work as a cohesive unit and make a coordinatedeffort to help the people of Kerala, instead of separate entities making individual efforts.” Smt Badal said that her Ministry was in regular contact with the State Government and district officials to gather their requirements.

Smt Badal spoke with Chief Minister of Kerala, Shri Pinari Vijayan to express her concern on the calamity and assured the State Government of all assistance from Ministry of Food Processing Industries. The Minister sought Shri Vijayan’s inputs on what assistance was immediately required, to which the Chief Minister informed that lakhs of infants in Relief Camps were in requirement of baby food. The requirement was conveyed to food processing companies by the Union Minister.

The meeting was in pursuance of an appeal by Smt Badal on 19th August, 2018 to food processing companies across India to contribute generously to the Kerala relief operations. Consequently, the companies have pledged full support to the endeavour by Ministry of Food Processing Industries to reach out to the affected population. Some of the contributions already made or pledged for delivery within 2 days are mentioned below:

The Union Minister reiterated her nomination of following Officer to coordinate this effort and the industries could contact them to make desired donations.

2018-08-21
Editor in chief
Previous: Film Review: Local Toka love Chokha
Next: Over 600 government buses have stayed off the roads across the state for OSRTC staff agitation