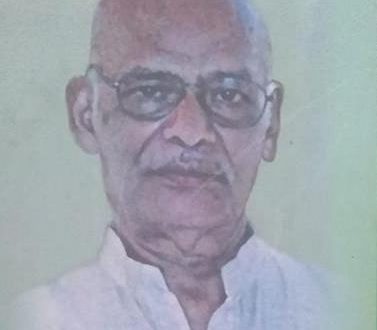 Bhubaneswar:21/8/18: Former minister and eminent writer Jadunath Das Mohapatra died at a private hospital in Bhubaneswar on Tuesday. He was 90.

The former education minister’s son, daughter and relatives were present at his bedside when he breathed his last today afternoon.

Das Mohapatra was admitted to the private hospital on Sunday due to kidney-related ailments.

Born on March 1, 1929, in Balasore, Mohapatra started his political career as a student leader. He was the president of the Kolkata Utkal Chhatra Sangh.

He had Joined Congress in 1962 and was elected as general secretary of the Balasore District Congress Committee in 1964-1967 and President Balasore D.C.C in 1967. He was elected to Assembly from Soro constituency twice and had become a minister of the State. He was the Education minister in the cabinet of former Chief Minister Janaki Ballav Patnaik.

Apart from politics, he has gained popularity in literature. A reputed writer of the state, Das Mahapatra writes stories, poems, novels and dramas. Among his literary contributions, Gramya Nadira Teere, Bibhisika, Manisha Rajyaran Jale, Parasamani, Suryamandira, Sangram, Bhulihuana, Khyamakaribeki, Setubandh are readers’ favorite.It is worthy to note that odia film  Bhulihuana was produced by him which was based on his novel in the same name.this was first and last directorial debut of actor bijya Mohanty till now.

2018-08-21
Editor in chief
Previous: Special Train On August 23 To Flood-Ravaged Ernakulam
Next: Odisha Chief Minister Naveen Patnaik has ranked No.1 in terms of popularity within one’s own state