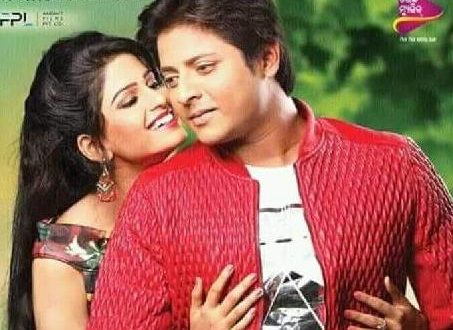 Bhubaneswa;21/8/189:Love stories, especially when served with a pinch of family emotions and bonds, never fail to delight the audience. Local Toka  love Chokha  is one such love-family drama, or at least the intent of the filmmaker is to provide a film of that kind. It is a tug-of-war between love and family; what to choose when faced with a choice and who will compromise, or would there be a mutual understanding. It’s a concept that’s been on for generations and will go on for all that to we know.

The film begins with Radhe‘s voiceover that people recall everything when they are about to die. As a gun is pointed at him, he recalls his love story. This is interesting, but what follows isn’t. The first scene is novel, but rest of the drama is routine. The movie picks up the momentum when he tries to convince Bhumi to get disturbed by him and fall for him. The moment she gets disturbed, the fun factor goes off and it falls into again formulaic way.

Radhe(Babushan) is a happy go lucky boy who takes his life as it comes. He is someone who doesn’t care about the future but enjoys every minute that it has got. He meets Bhumi (Sanmeera Nagesh) in an unexpected circumstance and immediately falls in love at first sight. He takes the old route, follows her, and even joins college to get in touch with her. Bhumi, on the other hand plays the typical father’s girl, someone who shares everything with her dad until she falls in love. Radhe somehow manages to impress Bhumi but not her father who is looking for a more settled son-in-law. To marry Bhumi, Radhe has to convince her dad but to do that; he needs to change his attitude. Will he or will he not?

The interval twist is quite predictable. In how many films have we not seen the heroine’s father fixing her marriage with another guy? But the back-story for Aditya Pattnaik character is interesting though. Till the interval the drama goes on funny manner though it is predictable. But post interval the time-pass moments is few. When Aditya Pattnaik puts Radhe in jail for a petty case, Radhe comes up with an idea, which is most idiotic and lengthy. Second half runs on such sequences, as there is no proper script.

Though you hardly get anything new or refreshing from the romance portion of Local Toka  love Chokha  what works in favour of the film is the comedies that keep on coming. Babushan is in total control and at ease with his dialogue delivery and funny one-liners. He is a ‘pakka’ all-rounder, be it comedy or, action or sentiment or style or love, Babushan  is so smooth in handling all these. Sanmeera Nagesh, on the other hand, has underplayed her role. She has been a little expressive in her previous films whereas here, Sanmeera Nagesh has toned herself down to suit the character. Another convincing performance indeed. Among the supporting actors, Mihir Das, and Aparajita do welll, Local Toka  love Chokha  is a movie that you will enjoy for its comedies and only for that. The screenplay does drag along a bit. Some of the scenes are a little too dramatic and should have been a part of 90’s films.Last but not the list Local Toka  love Chokha is frame to frame   copy of telgu film  NENU LOCAL.Only two odia film song is being inducted in one scene that was Mu Danda Balunga.. & Hrudayra Eai sunyata Ku …from Odia film was original rest is in  Local Toka  love Chokha  was just an adaptation of Telgu Film NENU LOCAL scene to scene.