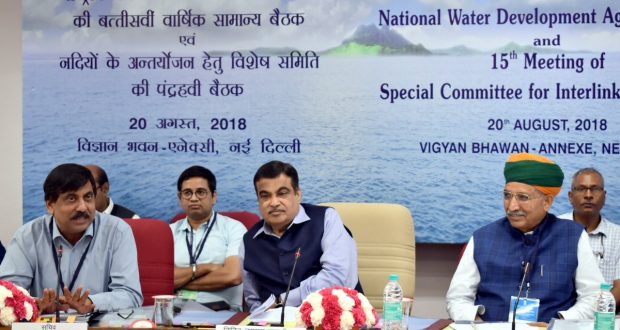 Newdelhi:20/8/18:Union Minister for Water Resources, River Development and Ganga Rejuvenation, Shipping, Road Transport & Highways Shri Nitin Gadkari today stressed on the need to develop consensus amongst the concerned states on interlinking of rivers so that the water draining unutilized into the sea could be utilized for the needy areas. He called upon states to discuss and sort out issues through active consultation so that the projects can be implemented on priority.

Reiterating that the project for interlinking of rivers is very important for enhancing water and food security of the country and essential for providing water to drought prone and water deficit areas, Shri Gadkari said that steps have been taken for early implementation of five interlinking projects and Memorandum of Agreement for implementation of these projects is being finalised in consultation with the concerned state governments. These five projects include Ken-Betwa link project, Damanganga-Pinjal link project, Par-Tapi-Narmada link project, Godavari-Cauvery (Grand Anicut) link project and Parvati-Kali Sindhu-Chambal link. National Water Development Agency (NWDA) so far has received 47 proposals of intra-state links from 9 States viz. Maharashtra, Gujarat, Jharkhand, Odisha, Bihar, Rajasthan, Tamil Nadu, Karnataka and Chhattisgarh. The successful completion of these projects will lead to reduction in disaster during floods, improved irrigation facilities, employment generation in rural agriculture, and increase in exports and decrease in migration from villages.

Shri Gadkari also suggested that it is high time to think about a proper legal mechanism to resolve inter-state and centre-state issues in ILR projects. He added that river interlinking projects envisage that the surplus water available in Himalayan Rivers be transferred to the areas where water supply is not adequate in the Peninsular India. However, huge quantities of water from several Peninsular rivers drain unutilized into the sea, and river interlinking projects are seriously looking at  transfer of this water to  water deficit areas of Peninsular India.

Shri Gadkari requested the Ministers of various States to identify the river basins which have surplus water availability in their States after meeting all demands, from where water can be transferred to deficit areas so that drought in those areas can be mitigated, agricultural production could be increased, resulting in the upliftment of socio-economic profile of the society.

Minister of State for Water Resources, River Development and Ganga Rejuvenation Shri Arjun Ram Meghwal said that many local issues were sorted out by healthy discussions during the regional conferences which were held in the past few months. He said such conferences and follow up meetings should be promoted.