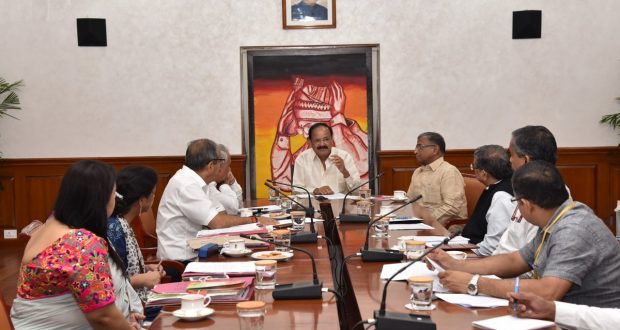 Newdelhi:20/8/18:The Vice President of India & the Chairman, Rajya Sabha, Shri M. Venkaiah Naidu and the Speaker, Lok Sabha, Smt. Sumitra  Mahajan, here today, urged the Members of Parliament (both Rajya Sabha & Lok Sabha) to generously contribute from their MPLADS funds for relief and rehabilitation works in flood affected Kerala besides considering to donate their one month’s salary for the same. Both the Presiding Officers of Parliament took the lead by announcing their decision to donate their one month salary for relief works in Kerala.

Shri Naidu and Smt. Mahajan met this evening at the official residence of Vice President of India and discussed the scale of damage in Kerala before issuing the joint appeal. The appeal to MPs, read out to the media by Shri Naidu said:“Hon’ble Members are aware that there has been large scale devastation in various parts of Kerala due to floods in the State in which many people have lost their lives and thousands are left stranded besides heavy damage to property. Keeping in view the intensity and magnitude of the floods in Kerala, the Government of India has declared this a calamity of a ‘severe nature’.Paragraph 2.8 of the Guidelines of Members of Parliament Local Area Development Scheme reads as follows:

“In the event of ‘Calamity of severe nature’ in any part of the country, an MP can recommend works up to a maximum of Rs.1 cr for the affected district”.

We appeal to all the Members of Parliament to contribute generously from their MPLADS funds for relief and rehabilitation works in the affected areas of Kerala, as permissible under the MPLADS Guidelines, accordingly.

Shri Naidu and Smt. Sumitra Mahajan will also write letters to Members of Rajya Sabha and Lok Sabha respectively seeking their generous help, enclosing therewith the joint appeal made today.At the behest of Shri Naidu, Rajya Sabha Secretariat on the 16th of this month wrote to the Ministry of Home Affairs regarding the Government’s assessment of the scale of calamity in Kerala and the Government clarified that “Keeping in view of the intensity and magnitude of the floods/landslides of 2018 in Kerala, this is a calamity of a ‘severe nature’ for all practical purposes.

Shri Naidu, earlier in the day discussed with the Deputy Chairman of Rajya Sabha Shri Harivansh, who is also the Chairman of the MPLADS Committee and senior officials the MPLADS Guidelines and the need to reach out to MPs for their generous contributions for relief works in Kerala. He also spoke to former Deputy Chairman, Prof. P.J. Kurien, who is in Kerala, about the severity of the damage.As per MPLADS Guidelines, if the Government declares a calamity as of ‘severe nature’, each Member of Parliament can contribute up to Rs. 1.00 cr for relief and rehabilitation works. The Guidelines further say that from the day an MP makes such contribution, concerned authorities have to identify relief works in one month time and the same should be implemented within eight months.

2018-08-20
Editor in chief
Previous: PM Narendramodi addresses a prayer meeting in memory of the former Prime Minister Atal Bihari Vajpayee
Next: Shri Gadkari Stresses on the Need to Develop Consensus Amongst Concerned States on Interlinking of Rivers