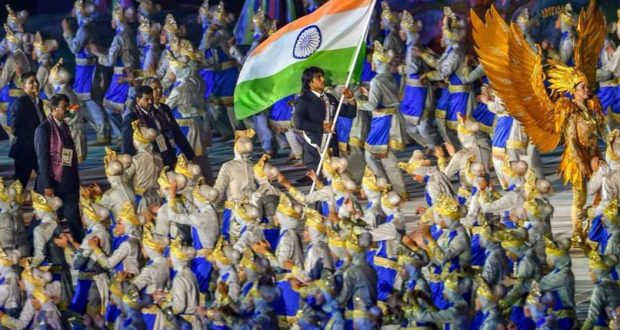 in International August 19, 2018 Comments Off on Indonesia put up a dazzling display of colours during the Opening Ceremony of the Asian Games 2018 777 Views

Jakarta:19/8/18: Indonesia put up a dazzling display of colours during the Opening Ceremony of the Asian Games 2018 at Gelora Bung Karno Stadium in Jakarta on Saturday.

Witnessed by around 40,000 spectators, the ceremony opened with 2,200 high school dancers from 18 senior high schools across the capital who enchanted the audience with the Saman dance, a traditional dance from Aceh, the westernmost province in the country.

A burst of fireworks followed the announcement, marking the start of the two-week tournament to be held in Jakarta and Palembang in Sumatra. The ceremony stage — with features of 120-metre length, 30-metre width and 26-metre height — showcased a towering mountain as its background, accompanied by plants and flowers unique to Indonesia.

Commonwealth Games gold medallist Neeraj Chopra was India’s flag-bearer in the opening ceremony. The Indian sports ministry had cleared an 804-member Indian contingent, including 572 athletes, for the Asian Games.

2018-08-19
Editor in chief
Previous: Director General of Police reviewed the security arrangements at the Kalinga Stadium for the Hockey Men’s World Cup
Next: Dhenkanal police rescued over 300 cows from the truck