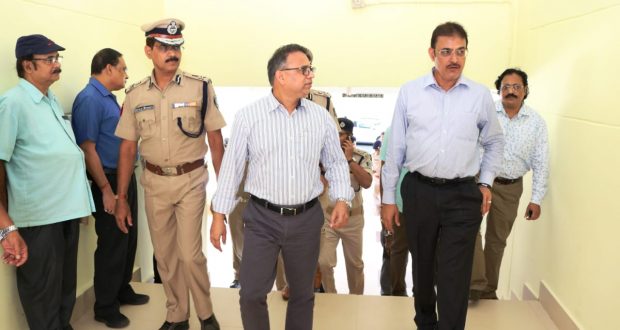 in Smartcity Bhubaneswar August 19, 2018 Comments Off on Director General of Police reviewed the security arrangements at the Kalinga Stadium for the Hockey Men’s World Cup 930 Views

Bhubaneswar:19/8/18: Director General of Police (DGP) RP Sharma on Saturday reviewed the security arrangements at the Kalinga Stadium for the Hockey Men’s World Cup to be held in November this year.

The Odisha Hockey Men’s World Cup 2018 will be the 14th edition of the biggest tournament in Men’s Hockey and the third time that India will be hosting it after having organised it in 1982 in Bombay and in 2010 in New Delhi.

A total of sixteen nations will take part in the tournament which will see each team play three matches during the league stage over the span of twelve days before four cross-over matches take place on 10th and 11th December.

The knockout matches will take place on 12th, 13th, 15th and 16th as the teams will look to become the Champions of the prestigious quadrennial event which was won by Australia in 2014.

2018-08-19
Editor in chief
Previous: Bhumika &Babusan –’ Sriman Surdas‘muhurat was held at Jagannath Temple near Khannagar in Cuttack
Next: Indonesia put up a dazzling display of colours during the Opening Ceremony of the Asian Games 2018