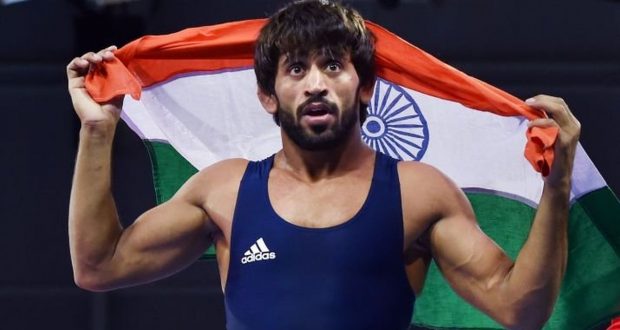 Jakarta:20/8/18: A dominating Bajrang Punia opened India’s gold medal account at the Asian Games, bringing smiles and relief to the Indian camp which was jolted by the early exit of star wrestler Sushil Kumar on Sunday.

An in-form Bajrang won his maiden Asian Games gold in the 65kg category but a ‘rusty’ Sushil lost his last chance to add an Asiad gold to his collection of medals after losing his qualification bout 3-5 to Bahrain’s Adam Batirov in the 74kg category.

Bajrang came into the Games after winning three tournaments – Commonwealth Games, Tbilisi Grand Prix and Yasar Dogu International – and carried on with his superlative show.

Such was his domination that the 24-year-old from Haryana won all his bouts, till the final, by technical superiority.

In the final, he was tested by Japan’s Takatani Daichi but Bajrang held his nerves to prevail 11-8 in an exciting battle. He raced to a 6-0 lead but the Japanese kept at it and put Bajrang under immense pressure.

Bajrang emulated his mentor Yogeshwar Dutt, who won gold in the last edition, and is now one of the few Asiad gold medal winners in wrestling.