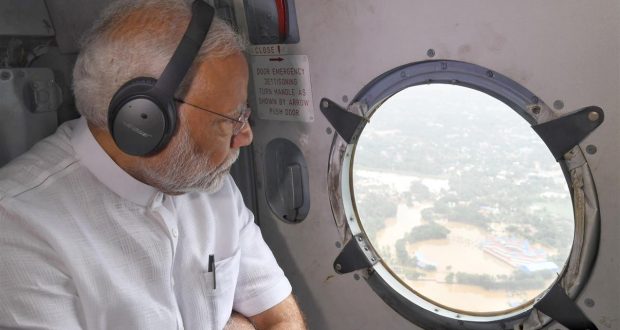 PM visits Kerala, reviews relief and rescue :Announced a financial assistance of an extra Rs 500 crore to the State

in National August 18, 2018 Comments Off on PM visits Kerala, reviews relief and rescue :Announced a financial assistance of an extra Rs 500 crore to the State 750 Views

After the review, the Prime Minister announced a financial assistance of Rs 500 crore to the State. This is in addition to Rs. 100 Cr. announced by the Home Minister on 12.08.2018.  He also assured the State Government that relief materials including foodgrains, medicines etc would be provided, as requested. 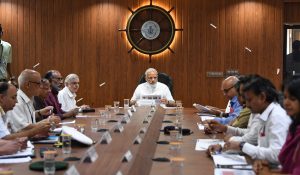 The Prime Minister, Shri Narendra Modi chairing a high level meeting with the officials to take stock of the flood rescue and relief operations, at Kochi,

PM also announced ex-gratia of @ Rs. 2 lakh per person to the next kin of the deceased and @ Rs. 50,000 to those seriously injured from PM’s National Relief Funds (PMNRF).

PM has directed Insurance Companies to hold special camps for assessment & timely release of compensation to the affected families/beneficiaries under Social Security Schemes. The directions have also been issued for early clearance of claims under FasalBimaYojna to agriculturists.

PM has directed National Highways Authority of India (NHAI) to repair main national highways damaged due to floods on priority. The Central Public Sector like NTPC and PGCIL have also been directed to be available to render all possible assistance to the State Government in restoring power lines. 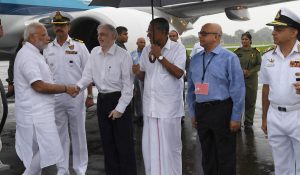 The Prime Minister, Shri Narendra Modi being received by the Governor of Kerala, Justice (Retd.) P. Sathasivam and the Chief Minister of Kerala, Shri Pinarayi Vijayan, on his arrival, in Kochi, to survey the flood affected areas, on August 18, 2018.

On 12th August, 2018, Shri Rajnath Singh, Union Home Minister accompanied by Shri K.J. Alphons, MoS (I/C), Tourism and senior officers visited the flood/landslide affected areas of Kerala and carried out aerial survey of the affected areas and reviewed the search, rescue and relief measures taken by the State and Central Government agencies with CM, Kerala, and other Ministers and Officials. The Home Minister also announced release of Rs. 100 Cr. in advance from the NDRF.An Inter-Ministerial Centre Team (IMCT) has already visited the affected areas in the State for assessment of losses from 7-12 August, 2018 as per the Memorandum dated 21.07.2018 submitted by the State Government.The Prime Minister complimented the State Government for the efforts made in meeting the challenges of the unprecedented situation. He observed that rescue of people who are still marooned remains the topmost priority. Government of India will continue to support the State Government in all its endeavours.