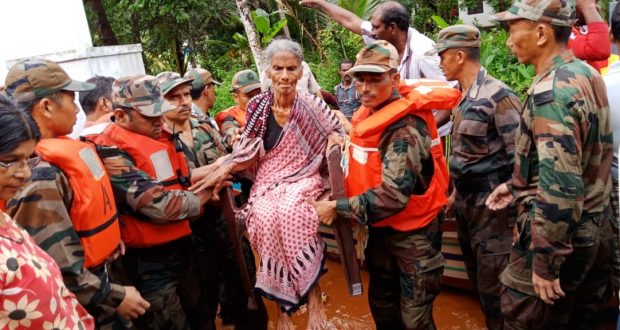 in National August 17, 2018 Comments Off on NCMC meets for the second time in two days to review flood situation in Kerala 999 Views

Newdelhi:17/8/18:The National Crisis Management Committee (NCMC) met for the second time in two days here today to review the rescue & relief operations in the flood affected areas in Kerala. Cabinet Secretary Shri PK Sinha, who chaired the meeting, held a video conference with the Chief Secretaries of Kerala and Tamil Nadu. It was decided to mobilise additional resources of all agencies including Army, Navy, Air Force, Coast Guard and National Disaster Response Force (NDRF) to provide the required assistance to Kerala.

Indian Navy has deployed 51 boats along with diving teams, 1,000 life jackets and 1,300 gumboots are being rushed to Kerala today. It flew 16 sorties in 48 hours in rescue operations. It will airdrop 1,600 food packets today.

The IAF deployed 23 helicopters and 11 transport aircraft. Some of the aircraft are being flown in from Yelahanka and Nagpur.

NDRF has mobilised 43 rescue teams and 163 boats along with other equipment.

Cabinet Secretary directed these organisations to mobilise additional boats and equipment including from CAPFs such as CRPF, BSF and SSB.

Railways has provided 1,20,000 water bottles. Another 1,20,000 bottles are ready to be despatched. It is also running a special train carrying 2.9 lakh litres of drinking water that will reach Kayakulam tomorrow.

Use of Naval airstrip at Kochi for use by civilian airlines has been offered to the Kerala Government as the civilian airport remained closed.

Kerala Government has been advised to explore use of V-SAT communication links in areas where telephone connectivity has been disrupted.

Cabinet Secretary also directed that emergency medicines may be put on standby.

The NCMC will meet again tomorrow to review the situation.

2018-08-17
Editor in chief
Previous: Prem Kumar—Salesman of the Year is slated to be a Durga puja release
Next: Minister of Tribal Affairs Jual Oram recalls the immense contribution of Former   Prime Minister Atal Bihari Vajpayee.