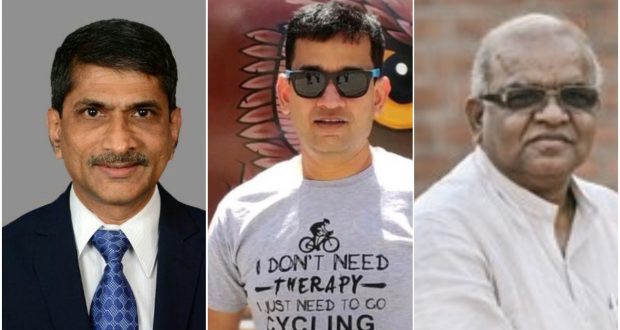 Bhubaneswar: 16/8/18:The Odisha government has appointed Prof HM Shivanand Swamy, Amit Bhatt and B. Venu Gopala Reddy as three independent directors of the Capital Region Urban Transport (CRUT), the special purpose vehicle (SPV) for the development of public transport infrastructure and facilities in and around State Capital. This appointment will be valid for three years.

Prof. Shivanand Swamy, currently the Executive Director, Centre of Excellence in Urban Transport, CEPT University, Ahmadabad, is an economist and urban and regional planner of repute and has been an educator, researcher, policy advisor and consultant in urban transport planning and management.

He is currently leading a “Leaders Programme in Urban Transport Planning and Management” aimed at building leadership in urban transport development in India. Prof Shivanand Swamy has been instrumental in upgrading CEPT from an autonomous institute to that of a university.

Amit Bhatt of WRI India is a director of the organisation’s Delhi office and has been in leadership role in the sector for last 18 years. A member of Institute of Urban Transport, he has expertise in public transport planning, urban transport, non-motorised transport (NMT), capacity building, road safety and urban development.

Bhatt’s major project “Raahgiri Day”, which started in 2013 in cities of North India was a major success story for engaging communities to bring about changes for popularising the concept of NMT. It can be noted here that “Raahgiri Day” also started here in January 17, 2016, and was extremely successful. Later it was renamed as “Patha Utsav” towards the end of 2017.

B. Venu Gopala Reddy, former Chief General Manager (CGM) and Head of Operations, SBI, Bhubaneswar from 2015 to 2018, has 36 years of experience in banking operations in key positions, delivering record-breaking performances through teamwork and building relationships.

CRUT, formerly known as Bhubaneswar Puri Transport Services, with 16 directors on its Board, aims to provide reliable, safe, accessible, user-friendly and sustainable public transport and set up a mechanism to deliver public transport services, that keeps pace with the growth in demand and in sync with the latest technological innovations.

2018-08-16
Editor in chief
Previous: A leader for the ages – ahead of his times:Tribute to Atal Bihari Vajpayee
Next: Odisha School College Teachers and Employees’ United Forum staged a dharna near Gandhi Marg