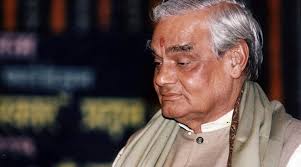 New Delhi:16/8/18: Former Prime Minister Atal Bihari Vajpayee, who has been admitted for the last nine weeks at AIIMS, Delhi, is on life support system. His health has worsened since Tuesday and is critical, an official statement by AIIMS said late on Wednesday evening. 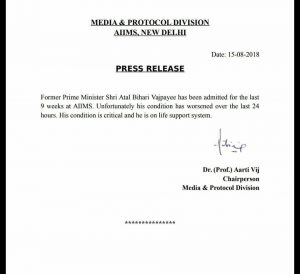 93-year-old Mr Vajpayee was admitted to the hospital on June 11 with a kidney tract infection, chest congestion and urine output on the lower side.

Atal Bihari Vajpayee was thrice elected the prime minister between 1996 and 1999 and is the only non-Congress Prime Minister to complete the full term of five years, from 1999 to 2004. As his health deteriorated, he had slowly withdrawn himself from public life and was confined to his residence for years.