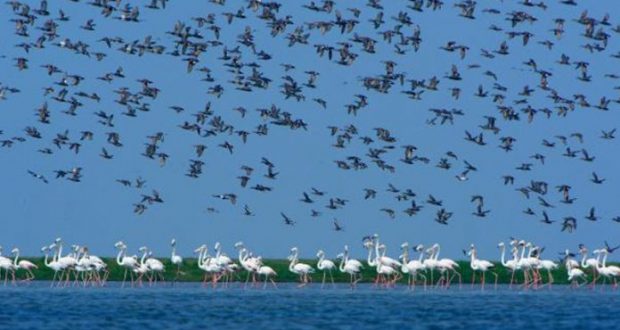 Bhubaneswar:14/8/18: The Odisha chapter of Indian National Trust for Art and Cultural Heritage has expressed deep concern over the proposed move to establish a water aerodrome in Chilika, country’s largest brackish water lake.

INTACH office bearers in letter shot off to Government of Odisha and the Centre have urged for the reconsideration of the proposal of operating sea planes in the Chilka Lake.

“The delicate ecosystem of this Ramsar Site will be severely affected by such activities. He said that the eco-system of Chilka is already under severe strain and such operations will badly affect the lake and its environs. The bird sanctuaries at Nalabana and the neighbouring lake side villages have seen a resurgence of migratory birds since the last few years, operating a seaplane will spell the doom for them. Tripathy said that the Kerala government had mooted the idea of operating sea planes in 22 places, and a detailed DPR had been prepared by Pawan Hans. Test flights had been undertaken and the places for the hydrodromes identified, but the project was shelved due to it being not feasible and the impact it would have on the ecosystem of the backwaters”, said A.B.Tripathy, State Convener of INTACH

Anil Dhir, the Project Coordinator of INTACH, said that worldwide, sea planes are used only in places where road, air and ferry connectivity is difficult. The production and use of seaplanes worldwide is in decline with production levels at the lowest. Dhir, who is a former pilot, said that seaplanes are expensive to operate as they have a significant weight penalty. The floats itself cost 40 % of the price of the airplane.  They are slow and can carry only 8-10 passengers. Besides, the average flying time of  80 % of the seaplanes all over the world is just 15-25 minutes.

The sea planes will have to be operated from Bhubaneswar or the Ranglaiunda airport at Berhampur, with a flight time that would not be even 20 minutes. It will be illogical to operate flights to Chilka when one can reach Mangalajodi in 50 minutes by road. The travel time to Balugaon, Barkul , Rambha and Satapada too is around an hour and a half with excellent roads.

Another INTACH member, noted environmental activist Dr. Biswajit Mohanty, said that it is an illconceived proposal which should never have been mooted. The proposal will  require clearances from the Ministry of Defence, Ministry of Environment and Forests, the DGCA, the CRZ authorities, local bodies, the State’s Forest Department, the  Integrated Coastal Zone Management and the State Pollution Control Board. Dr. Mohanty is of the opinion that the Lake’s eco-system is already over stretched. The Ph levels, the salinity, the siltation and the pollutants besides the illegal gherries are sounding the death knell.