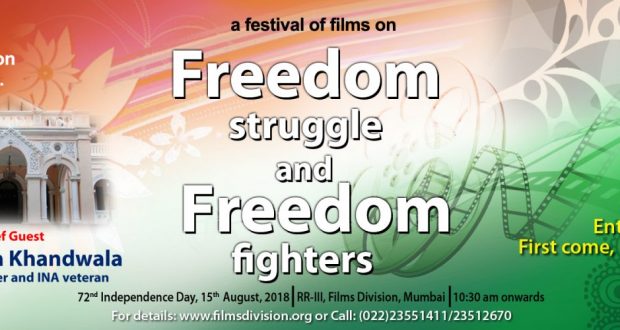 in Entertainment August 14, 2018 Comments Off on Film festival to be held on theme of “Freedom Struggle and Freedom Fighters” 1,082 Views

Mumbai:14/8/18:Films Division, Ministry of Information and Broadcasting will hold film festival on occasion of 72ndIndependence Day on the theme, “Freedom Struggle and Freedom Fighters”, on 15th August, 2018.

The festival will be inaugurated by Smt. Rama Khandwala, nonagenarian freedom fighter and Indian National Army (INA) veteran.During the festival, noteworthy documentary films on freedom struggle and freedom fighters will be screened from 10:30AM, apart from a cultural performance featuring flute recital by veteran artist, Pt. Sunil Kant Gupta and patriotic songs by the staff of Films Division.

INA veteran Smt. Rama Khandwala (91) is a recipient of the prestigious National Tourism Award from the President of India, for the `Best Tourist Guide’ in the year 2017. Her daunting stamina stems from her early training as a recruit in Subhash Chandra Bose’s Indian National Army (INA). A Second Lieutenant belonging to the Rani Jhansi regiment in Rangoon in Burma, Smt. Khandwala spent her days marching, hoisting flags, learning how to wield a rifle, a bayonet and the Bren Machine Gun. Khandwala’s fluency in Japanese – a result of the Japanese occupation of Burma from 1942-1945 – helped her bond with tourists from Japan. Her language skills and interest in Buddhism even led her to meet the Dalai Lama and the King of Bhutan. She met the former while working as an interpreter for a Japanese documentary and she accompanied the latter to Elephanta’s Buddhist caves as a guide.

“Freedom Struggle and Freedom Fighters”: the following noteworthy documentaries will be screened under this theme,from 11:30 am to 1:00 pm at RR – III theatre, Films Division Complex, 24 Pedder Road, Mumbai.