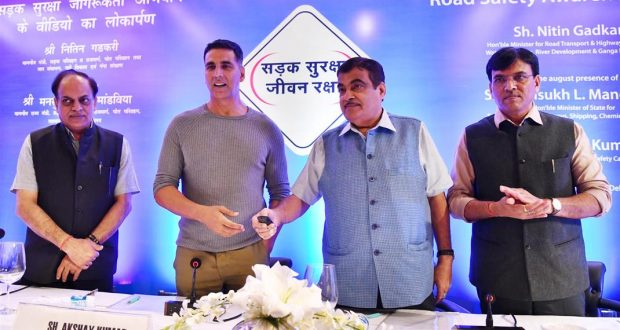 Appreciating Akshay Kumar’s concern for social activism, the Minister recalled his recent movies ‘Padman’and ‘Toilet : Ek Prem Katha’ which have gone a long way in passing the government’s message of cleanliness and hygiene. Shri Gadkari called upon people to adopt good practices in road safety to build a better society free of accidents.

Shri Akshay Kumar shared his experiences of producing the short films. He said, he feels proud to join the government’s efforts to make Indian roads safe, and is participating in road safety campaign for the betterment of the society.

MoS Shri Mandavia enumerated the large number of deaths in the country due to road accidents. He said, over 65 per cent of the deaths on roads were of the people in employable age, which seriously impacts their families. He said, reducing accidents means increasing prosperity in the country.

Secretary in the Road Transport and Highways Ministry Shri Y S Malik welcomed the spirit of Akshay Kumar in accepting the government’s offer to join as its Brand Ambassador, and hoped that the short films produced by the ministry with the actor will be etched in public memory and inspire people to follow road safety rules.

2018-08-14
Editor in chief
Previous: Two persons were killed and 12 others injured when lightning struck them during a football match
Next: Film festival to be held on theme of “Freedom Struggle and Freedom Fighters”