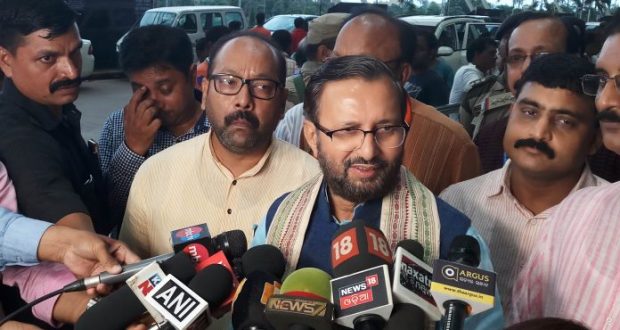 Bhubaneswar:13/8/18: Dismissing the rumours about a secret pact between the BJP and the BJD, Union HRD Minister Prakash Javadekar on Sunday said that the saffron party will fight next elections alone.

There have been speculation about the same after the ruling regional party supported the NDA-backed candidate in the election for the Rajya Sabha deputy chairman’s post earlier this week.

“BJD and many other political parties supported BJP during Rajya Sabha deputy chairman election, but there is no alliance and they are not part of the NDA,” Javadekar, who is on a three-day visit to the state, told mediapersons here.

The regional party’s support to the NDA candidate will have no impact on the BJP cadres in Odisha, he added.

However, senior BJP leader Bijay Mohapatra earlier on Saturday had said that the intimacy between Prime Minister Narendra Modi and the BJD president and Chief Minister Naveen Patnaik will have an adverse effect on the saffron party in Odisha in the forthcoming elections.

2018-08-13
Editor in chief
Previous: Members of Students Congress scuffled with police while they were on their way to gherao Naveen Niwas
Next: Bhubaneswar :13/8/18:Anil Mukim, IAS, Secretary, Ministry of Mines, Government of India & Dr. Tapan Kumar Chand, CMD, NALCO, met the Hon’ble Governor of Odisha Prof. Ganeshi Lal and discussed about the Mining and Aluminium scenario in the country in general and Odisha in particular.