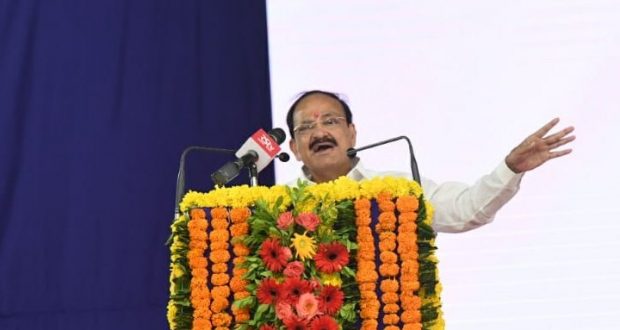 Bhabanagar:12/8/18:The Vice President of India, Shri M. Venkaiah Naidu has said that road connectivity is key to national development and added the connectivity has the potential to bring a positive change in lives of people living in remote corners of rural India. He was addressing the gathering during the foundation stone laying ceremony of four-laning of Adhelai – Nari section of NH-751, in Bhavnagar, Gujarat today. The Governor of Gujarat, Shri O.P. Kohli, the Chief Minister of Gujarat, Shri Vijay Rupani, the Deputy Chief Minister of Gujarat, Shri Nitinbhai Patel, the Minister of State for Road Transport and Highways, Shri Mansukh L Mandaviya and others dignitaries were present at the venue.

The Vice President said that infrastructure development is not only a condition of development of the country, but the criteria for development. It ensures social capacity and security, he added.

The Vice President said that connectivity is an essential and important component in bridging the urban rural divide and asked authorities to give equal priority to rural roads. They are crucial for all-round development of our country. National Highways symbolize social, economic and business unity of the country, he added.

Expressing concern over the incidents of road accidents, the Vice President said that road safety should be paramount and called for creation of medical infrastructure such as ambulances and first aid centres near highways to provide immediate assistance in case of emergency.

The Vice President called on youth of the country to take active part in the developmental process. He also stressed on the need to provide adequate support, infrastructure to youth to realise their potential. It is essential that the politics of the country reflect the aspirations of young people, he added.

On this occasion, the Vice President also released the book titled “My Journey in Parliament,” a compilation of questions raised in Parliament by Shri Mansukh L. Mandaviya.