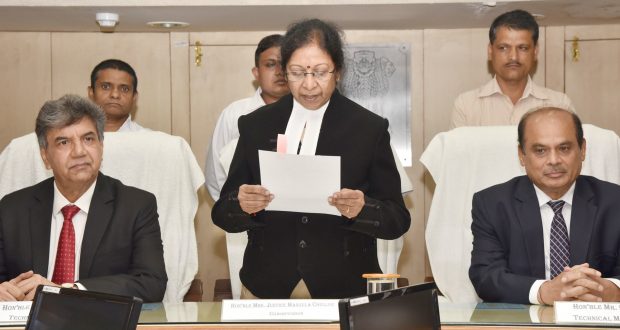 Smt. Justice Manjula Chellur swearing in as the Chairperson, Appellate Tribunal for Electricity, in New Delhi on August 13, 2018.

in National August 13, 2018 Comments Off on New Chairperson of Appellate Tribunal for Electricity 797 Views

A large number of advocates and other eminent guests were also present at the function.

Smt. Justice Manjula Chellur was born on 5th December, 1955 in Karnataka. She received her Bachelor of Arts degree from Allum Sunmangalamma Women’s College, Bellary, and went on to earn her law degree from Renukacharya Law College, Bangalore.  In 1977, the Supreme Court of India sponsored her on a Gender & Law fellowship to England’s University of Warwick. In 2013, Smt. Justice Manjula Chellur received an honorary doctorate from Karnataka State Women’s University.

2018-08-13
Editor in chief
Previous: MHA Advisory against use of National Flag made of plastic
Next: Millennium India Brings Smart and Cost-effective POS Solution for Retailers