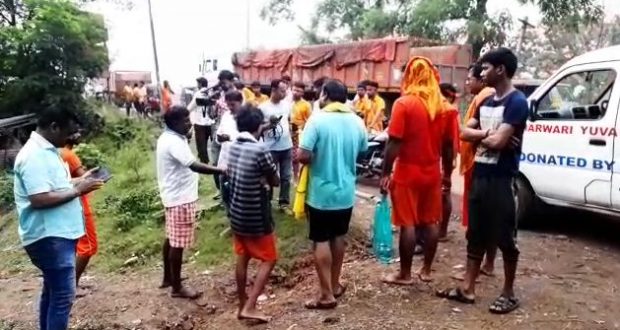 Four kanwariyas were killed after being hit by a train

in District Diary August 13, 2018 Comments Off on Four kanwariyas were killed after being hit by a train 720 Views

Rourkela:13/8/18; As many as four kanwariyas were killed after being hit by a train while they were walking on a railway bridge near Panposh in Odisha’s Rourkela city last night.

According to reports, seven Bol Bam devotees had come to Rourkela from Chhattisgarh to pour holy water at Vedvyas temple here.

They were walking through a railway bridge on Brahmani river here around 11.30 pm yesterday when a train arrived. While three of them somehow managed to escape, the rest got hit by the moving train and fell into the river, leading to their death.

Till last reports came in, bodies of three deceased persons were recovered while another body was yet to be traced in the river.

2018-08-13
Editor in chief
Previous: BMC chalked out strategies to fight waterlogging and urban flooding situation
Next: Members of Students Congress scuffled with police while they were on their way to gherao Naveen Niwas