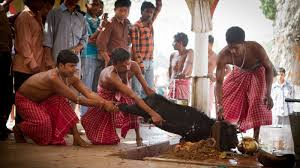 Bhubaneswar:108/18; After People for the Ethical Treatment of Animals (PETA) India sent a letter to senior officials of the state government, Odisha police issued an order to all senior police officials to ensure that illegal animal sacrifices do not take place in the state.

PETA had written a letter to Chief Secretary, Director General of Police, and Director of Animal Husbandry and Veterinary Services requesting that they take all possible measures to stop the illegal transport and killing of animals in the lead-up to Bakrid owing which the state police headquarters issued an order to all senior superintendents and deputy commissioners of police directing them to ensure that illegal animal sacrifices do not take place in the state, as was also advised by the Animal Welfare Board of India in its 20 July circular.In its letter, PETA India pointed out that – through orders dated 17 February 2017 and 10 April 2017 on two matters regarding the sacrifice and killing of animals for meat – the Supreme Court ruled that animals can be slaughtered only in officially licensed slaughterhouses and that municipal authorities must ensure compliance with this ruling. The Prevention of Cruelty to Animals (Slaughter House) Rules, 2001, and the Food Safety and Standards (Licensing and Registration of Food Businesses) Regulations, 2011, permit the slaughter of animals for food only in registered or licensed slaughterhouses equipped with species-specific stunning equipment. The Food Safety and Standards (Food Products Standards and Food Additives) Regulations, 2011, prohibit killing camels for meat, a practice prevalent during Bakrid. And the Transport of Animals Rules, 1978, is also frequently thwarted during the festival.