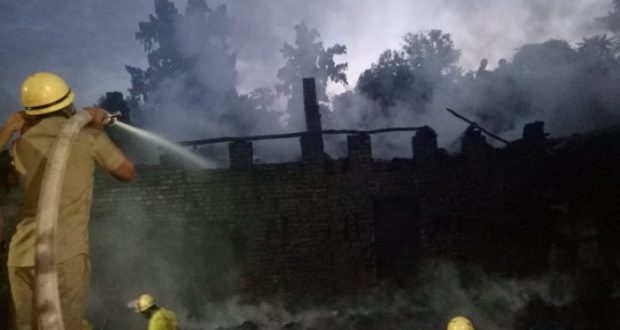 in Smartcity Bhubaneswar August 10, 2018 Comments Off on At Ananta Basudev Temple gutted in Fire 645 Views

Bhubaneswar:10/8/18; A few of hours after 22 rooms of the Rosaghara (kitchen) of Ananta Basudev Temple in Old Town here were gutted in the early hours of Friday, Tourism and Culture minister Ashok Chandra Panda sanctioned Rs 3 lakh for the repair work.

The minister reached the spot and took stock of the situation. He informed that all steps would be taken by the state government to repair the Rosaghara.

he fire started around 3:30 am in which 22 rooms of Rosaghara with thatched roof were completely reduced to ashes. However, no injury or casualty was reported in the mishap.

On being alerted, three fire tenders reached the spot at 4 am and managed to douse the flames after an hour-long effort. The exact loss to temple property and the reason behind the incident are yet to be ascertained.

2018-08-10
Editor in chief
Previous: Joint eviction squad of Bhubaneswar Development Authority evicted a major portion of land at Behera Sahi
Next: PETA issued an order to ensure that illegal animal sacrifices do not take place in the state