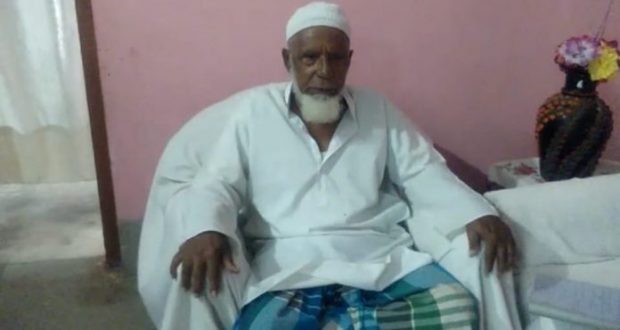 in District Diary August 7, 2018 Comments Off on Father Seeks exemplary punishment For his son if he is involved in terror ploy 743 Views

Kendrapada :7/8/18: 80-year-old father of the arrested Pakistani-based Lashkar-e-Taiba terror group handler today said his son needs to be severely punished as per the law of the country for seditious and anti-national activities.

“I am an Indian. My country is above my son. He should be meted out exemplary punishment if he is involved in terror ploy. I have no touch with him since past 12 years. I am ready to be punished at this ripe age if my complicity is found in my son’s wrong deeds”, said octogenarian Mir Aainuddin , father of Habibur Rahaman arrested by National Investigation Agency at Delhi airport yesterday.

Ainuddin, a native of Mirmahala hamlet in Tendakuda gram panchayat under Patkura police station, said “Habib was my eldest son. I had no inkling whatsoever that he has got associated with terror outfit”.

He was a good wielding mechanic. He had left for Bombay (now Mumbai) in 1988 when he was 24 year old. He had got settled in Mumbai and had two wives. Later he had moved to Saudi Arabia for better income. He had come to the village to attend younger brother Ziaur’s wedding in 2006. He never came back again to village as we had disowned for his second marriage which was an inter-religion one. Since then, all ties with were severed with him, he recalled.

I got the shock of my life when NIA team summoned us in January last. We were told that Habibur’s nexus with terror outfit is suspected. We had told the investigators that Habib has entirely cut off relation with family since 2006, he said.