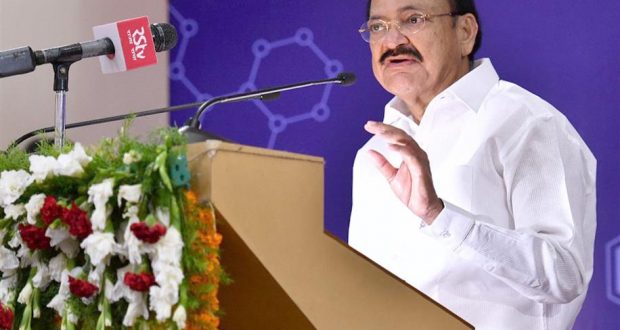 Scientists should come up with path-breaking innovations: Vice President

Hyderabad:5/8/18:Vice President of India, Shri M. Venkaiah Naidu has said that scientific institutions to nurture talent and foster path-breaking innovations to transform the socio-economic landscape of the country. He was addressing the gathering after inaugurating the Platinum Jubilee Celebrations of CSIR-IICT (Indian Institute of Chemical Technology, in Hyderabad today. The Union Minister for Science & Technology, Earth Sciences and Environment, Forest & Climate Change, Dr. Harsh Vardhan, the Governor of Telangana, Shri E.S.L. Narasimhan, the Deputy Chief Ministers of Telangana, Shri Kadiyam Srihari and Shri Mohammad Mahmood Ali and other dignitaries were present on the occasion.

The Vice President said though we are progressing on various fronts, incremental progress was not enough. He further said that Scientific organizations have to set ambitious goals and strategically position themselves to become leading institutions in the world. The government must facilitate this quest for excellence by providing funds, freedom and flexibility and the private sector also needs to come forward to liberally support research, he added.

The Vice President emphasized the need to hugely step up investments in R & D to promote the culture of innovation and discovery. He further said that reducing procedural bottlenecks, removing hierarchical barriers and resetting priorities is also crucial and the leadership in scientific institutions should encourage bright young scientists to come up with new and unconventional ideas and projects. “Opportunities must be provided for undertaking path-breaking research that answers one or more of current societal challenges”, he added.

Referring to UN’s 17 sustainable development goals which include ending poverty in all its forms, promoting sustainable agriculture and good health, the Vice President cautioned that all these ambitious goals cannot be achieved if we adopt “business-as-usual approach”. He further said that there is no dearth of talent in India and stressed on the need to create the right ecosystem for innovation to thrive. India, with 65 per cent of the population below the age of 35 years must equip the young people with scientific and technological knowledge and skills, he added.

The Vice President said that science is the key lever for sustainable development and a country’s prosperity and security are directly dependent on its scientific and technological progress. He further said that historically India has been a lighthouse of knowledge. Our Ayurveda system of medicine can be traced back to 5,000 B C, Indus Valley Civilization had irrigation and sewerage systems as far back as 2,500 BC, he added. 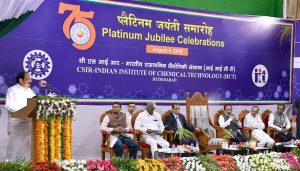 Referring to the contributions made by great Indian scientists like Aryabhatta, Varahamira, Charaka, Sushruta, Rishi Kanad and sage Patanjali, the Vice President said that there were innumerable legendary scientists of ancient India, who have enriched the world’s scientific treasure. We need to take pride in their achievements and share the knowledge we had inherited from them with the entire world, he added.

The Vice President said that the spirit of enquiry and the scientific temper, the spirit of asking relevant questions and seeking practical answers must become an integral part of our school and college education systems. The quality of teaching and research in our Universities and scientific institutions must be considerably improved, he added.

The Vice President said that Science has the greatest impact on people’s lives and institutions and asked institutions like IICT to focus on research on key areas such as agriculture and environment. An agriculture dependent country like India cannot progress unless the farmers’ lives are improved, he added.

2018-08-05
Editor in chief
Previous: KEI Industries target of Rs 200 crore business in the retail sector in Odisha by 2020-21
Next: President of India addresses seventh convocation of IIT Hyderabad