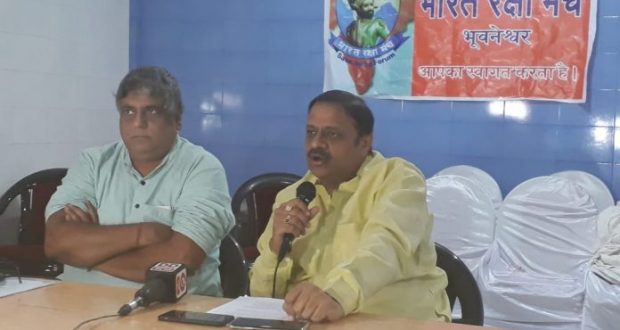 Special task force should be alert of Bangladesi infiltrators

in State News August 3, 2018 Comments Off on Special task force should be alert of Bangladesi infiltrators 823 Views

Bhubaneswar:3/8/18: With influx of Bangla infiltrators to the State looming large, Odisha needs to constitute a special task force without further delay to keep tab on illegal immigrants. The State government should get prepared to plug the possible influx of Bangladeshi infiltrators into the State from Assam in the face of recently released National Register of Citizens (NRC), according to Bharat Raksha Manch, an outfit espousing the cause of deportation of illegal immigrants.

BRM state convenor Murali Manohar Sharma said that Odisha continues to be a vulnerable state exposed to illegal immigrantion. With its long porous coastline, it has been the favourite spot for these illegal Bangladeshis. When the final draft of the NRC is released, the possibility of influx of persons who will not figure looms large. The State should be prepared and put into place measures to tackle the huge influx.

Anil Dhir, the National Secretary of the Manch said that other States have started taking measures to ensure that those left out of the Assam Draft do not infiltrate their regions. Manipur, Arunachal Pradesh, Uttar Pradesh, Tripura and Meghalaya have put alerts in their borders.

The large unchecked infiltration in the State that has been going on for years has developed into a whole impenetrable network. The profusion of Madrasas and Mosques that have sprouted all over the State, especially in the coastal regions, the increased crime rates, anti-national activities etc. have all been sidelined by the administration, he said.

The Chief Minister had, in 2015, declared on the floor of the house that 3987 illegal Bangladeshi immigrants were present in the State. Steps should be taken for their deportation.

A special task force needs to be constituted for the detection of these illegal immigrants. Retired personnel from the Para Military forces should be inducted as they have the necessary experience from their border duties.