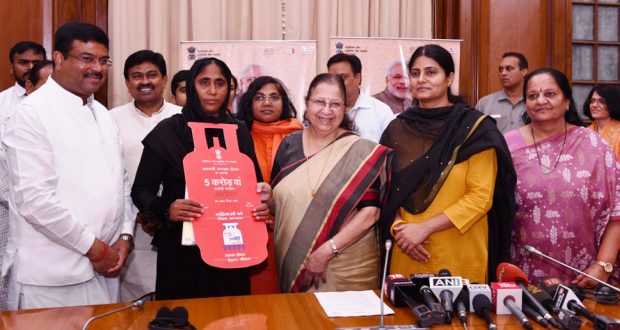 Modi Government launched Pradhan Mantri Ujjwala Yojana (PMUY) on 1st May, 2016 and it is implemented by Ministry of Petroleum and Natural Gas through its Oil Marketing Companies i.e., IOC, BPCL and HPCL through their network of distributors across the country. Through PMUY, initially, 5 crore BPL households were targeted for providing deposit free LPG connections to BPL households by 31stMarch,2019. In a record time of 28 months for its launch, PMUY achieved the initial target of providing 5 crores LPG connection to BPL households. In the current year, considering the huge success of the Scheme, target was revised to 8 crores with budgetary allocation of Rs 12,800 crore.

PMUY has been recognised by World Health Organisation as one of the decisive intervention by the Government to address the Indoor Air Pollution which accounts for nearly 10 lakh deaths in a year in the country.

PMUY aims at providing clean-cooking fuel to the poor households, which are otherwise vulnerable to various health hazards associated with indoor air pollution and bringing in qualitative charges in the living standards. PMUY is under implementation in the all the States/UTs. Beneficiaries are identified through Socio-Economic Caste Census List-2011 and in such cases where names are not covered under SECC list, beneficiaries are identified from seven categories which includes SC/ST households, beneficiaries of PMAY(Gramin), Antyodaya Anna Yojana, Most Backward Classes, Forest Dwellers, Resident of Islands/River Islands and Tea Garden & Ex-tea Garden Tribes.

2018-08-03
Editor in chief
Previous: More than 10,000 nominations received for Padma Awards – 2019, process open till 15th September
Next: There is no requirement of maintaining minimum balance in Basic Savings Bank Deposit