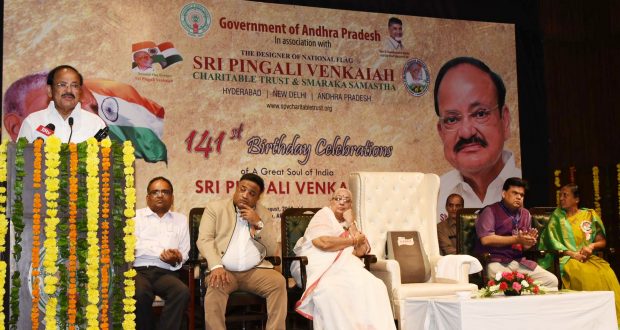 Respecting Pingali Venkaiah is to Respecting our National Flag:Vice President

in National August 2, 2018 Comments Off on Respecting Pingali Venkaiah is to Respecting our National Flag:Vice President 1,092 Views

Newdelhi:2/8/18:The Vice President of India, Shri M. Venkaiah Naidu has said that Share and Care is the Core of Indian Philosophy. He was addressing the gathering at the 141st Birth Anniversary Celebrations of Shri Pingali Venkaiah, the designer of Indian National Flag, organized by the Government of Andhra Pradesh and Sri Pingali Venkaiah Charitable Trust & Smarak Samastha, here today.

The Vice President said that it is the good fortune of Telugu people, that Shri Pingali Venkaiah who designed the National Flag representing the glory of the Indian culture, belongs to the state of Andhra Pradesh. 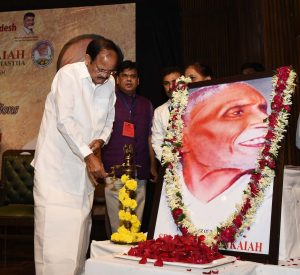 The Vice President said that Shri Venkaiah was the unsung hero of our freedom struggle who made immense contribution. He has devoted his entire life to the nation and worked relentlessly to make India a free country, he added.

The Vice President said that Shri Venkaiah was the one who did not expect anything for him, except his contribution for the country. He further said that he did not ask for any help on any day. Even in the days of his death, he was an unselfish patriarch who sought to cover the flag on his body, he added.

That Vice President said that respecting Shri Pingali Venkaiah is to respecting our National Flag. He will be remembered in all the victories of our great nation, he added.