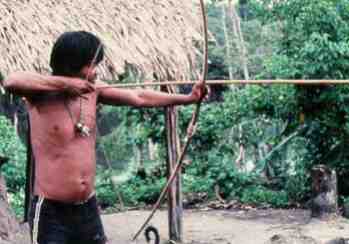 Ghinua was quite a famous name in the region as a proven hunter. His most potent and lethal weapon was the home-grown bow and arrow. Lying flat on the floor, he could stretch the string of his bow up to his ear while shooting. He could shoot sharply at the target from a fair distance of one mile. No matter how hard his opponents tried, he was always ahead of his competitors. Endowed with exceptional hunting skills, he had killed many wild animals such as deer, boars, and leopards; got better of two royal Bengal tigers. He had received a fair number of rewards from the Deputy Commissioner by killing two royal Bengal tigers.

On one eventful day, early in the morning, he turned up at the Deputy Commissioner’s bungalow with a terrific hunting. The bow was dangling from one shoulder, two or three arrows in hand, it was not at all surprising that the axe attracted attention of the other shoulder.

Seeing Ghinua in this rather informal attire, the orderly asked him, “Hey, what hunting you have brought today?” He was well known to Ghinua. He had shared a fair deal of rewards with Ghinua on many an occasion. To reply, Ghinua had only access to two set of unclean teeth, an inscrutable smile, indeed. Whether he laughed or grunted was beyond anybody’s guess? In fact, no one had ever noticed a laugh in Ghinua. He resorted to such uncanny behavior, occasionally. It was neither laughing nor crying-only an act of showing teeth.

The orderly retorted in a derogatory tone, “Hey, what hunting?”

Pointing out to an object knotted in a towel Ghinua said, “He has killed a gigantic animal today”.

Excited, the orderly asked, “A tiger?”

Ghinua nodded his head in disagreement.

What else, was it a leopard…bear…boar? Reveling in his success, Ghinua was on a continuous spree of nodding in the negative.

Agitated over not getting a satisfactory reply, the orderly asked him in a threatening tone,

The noisy and unruly spat outside had attracted the attention of the Deputy Commissioner, he came out of his bungalow. Ghinua prostrated before him showing his teeth in his usual uncharacteristic way. Upon knowing the interest of the commissioner to see what hunting he has brought, Ghinua took a fresh decapitated human head out from his towel and kept at his feet. He stepped back with shocking astonishment at the atrocious sight. His excitement notwithstanding, Ghinua asked for rewards in a matter-of-fact way. After some unsavory moments, the Commissioner could control himself with a lot of difficulty and hinted at Ghinua to wait for his surprise gift and went inside the house to inform police over phone. There was no other way to tame Ghinua except armed police protection. Ghinua had robust strength of a giant and was a man of uncommon strength. He always held a hatchet along with bow-and-arrow.

Ghinua’s simple and innocent mind was beyond reckoning the turn of events when he was put under arrest, hands and legs chained, without his knowledge. Why was he detained in such an unusual manner was beyond Ghinua’s comprehension? He was in a perpetual state of condemnation. Availing his limited share of chances, he would ask people around him about his trying time. People used to gossip and drop many derogatory comments over developments, concerning fate of Ghinua. Some would air an opinion that he would get a death sentence, there were others who would condemn him for a lifelong exile in Kalapani.

He told everything to the Deputy Commissioner and got the reply, “He could get instant rewards for killing bears and tigers on many occasions. But this time he had killed a man. What reward you deserve this time would be decided upon by a panel of five or six members.”  The commissioner’s convincing argument impressed Ghinua.

On the day of trial, Ghinua thought to himself that he would get rewards. Encouraged by the prospect of a possible reward, he briefed everything indiscreetly before the judge. He killed Govind Sardar to put an end to his tyranny in the village and to ward off every conceivable evil from the village. He took a lot of pain, though. He was the cynosure of many; but none had the courage and will power to kill him. Govind Sardar used to ride a motor cycle. He had accumulated wealth and property by robbing others’ wealth. He was known for his notoriety. There was no written record of the people he had killed, how many families he had deserted and how many women he had raped? He had an insatiable hunger for money, woman and property. He had also misappropriated Ghinua’s landed property by unfair means. On one evening, he had advanced to sexually assault Ghinua’s wife. How dare he! Seeing Ghinua, he scurried on his motorcycle. Was it easy to escape iron grip of Ghinua! He seized the initiative by shooting an arrow onto the motor cycle wheel. He decided to do away with Govind Sardar for once and all. Then with a strong blow of the hatchet he beheaded him and holding the cut head ran through jungle over night to deputy commissioner’s bungalow, covering thirty miles distance at a stretch.

Govind Sardar was not an ordinary man. He was always armed with a gun. People were afraid of him, more dreadful than a wild tiger or a bear. He would often put people at irreparable loss, more than a tiger or bear. Ghinua had to exhibit exemplary skill and audacity to kill him. Dora was feted by the Commissioner for his bravery. Killing rebel Jhapat Singh earned a cash reward of Rs 500/- a few years ago. But Jhapat Singh was out and out a good person. He had neither raped any woman nor taken any body’s landed property by force. He had only robbed the government treasury and had killed a few soldiers. Govind Sardar was a more dangerous man than Jhapat Singh for he committed heinous crimes. Ghinua deserved a better deal because he killed a more dreaded criminal, Govind Sardar.

The people present in the court room had a good laugh hearing Ghinua’s tale. The judge couldn’t hold his laughing, and said, “Yes, you will get an attractive reward”. The Government pleader said, “You have been brought here for a reward”.

Ghinua took the fun for granted. He was not aware of what was laughing or joke. His simple and innocent insouciance had it; the lighter vein was at best given a decent burial. At last the final judgment came and he was handed down a death sentence. He was to be executed for murder.

Ghinua couldn’t understand until then that he was a dreaded criminal in the eyes of law and he was awarded death sentence. How could he understand that killing Jhapat Singh and Govind Sardar were two different propositions altogether? He didn’t have the slightest inkling that killing Jhapat Singh and Govind Sardar were not the same thing. He could not comprehend the secret that one was a matter of pride and the other was glistered with guilt. He had no wit to enter into the cobweb of law for he was out and out a wild Santali. He was conspicuous by his wild and uncivilized standards!

He thought to himself that Dora received five hundred rupees killing Jhapat Singh. Why should he accept if not awarded more than that? He would go to the extent of returning the entire amount and say, “Better don’t give any reward, but I certainly deserve more.” He would ponder over so many things inside the dark cell of the Jail. No one was there to share his ideas with. He was not interested to indulge in conversation either. His mind was excited with   returning home with a reward.

At last, the day of hanging came. Upon asked about his last wish, he said, “My reward”. “Well, come and receive your reward”, he was taken by the sentries with assurance of a reward. His head was covered with a piece of black cloth. Restricted to himself, Ghinua thought, blind-folded he would be poured with gold and silver. Government rules and restrictions were put in place. The government had the knack of giving awards by adopting ingenious methods. Simply a reward couldn’t be given.  He was clueless about the clever, secret and unpleasant official ways.  Returning home he would show everything to his wife. His wife would be elated seeing the valuable gifts. Now he would expect a better living by being a proud owner of a well-furnished house and landed property. No Govind Sardar was there to rob him off peace and happiness now.

All of a sudden, something struck his neck.