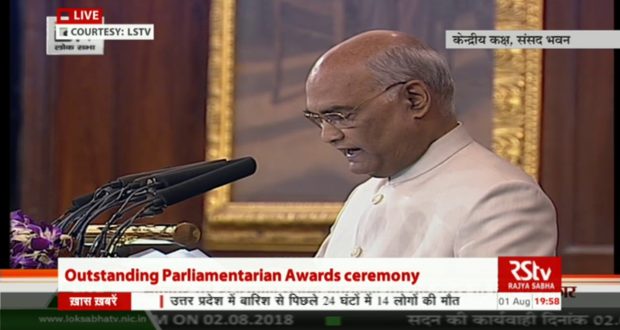 in National August 1, 2018 Comments Off on President of India presented the Outstanding Parliamentarian Award 945 Views

Newdelhi:1/8/18 The President of India, Shri Ram Nath Kovind, presented the Outstanding Parliamentarian Award for the years 2013-2017 today (August 1, 2018) in New Delhi.;Speaking on the occasion, the President congratulated all those being conferred with the Outstanding Parliamentarian Award – Smt Najma Heptulla, Shri Hukmdev Narayan Yadav, Shri Ghulam Nabi Azad, Shri Dinesh Trivedi and Shri Bhartruhari Mahtab. He said that as parliamentarians, each of them has added value to the proceedings of the House. They have done so while maintaining the dignity of Parliament, using their knowledge and wisdom. They have conducted themselves in a manner that is a model for other members.

The President said that the soul of Indian democracy lies in Parliament. MPs are not just representatives of a particular party or constituency. They are the trustees of our constitutional ideals. All MPs are accountable for the hopes and aspirations of millions of our citizens. This is a very big responsibility.

2018-08-01
Editor in chief
Previous: Next general elections is scheduled to be held in the April or May 2019.
Next: BJD leader and Cuttack MP Bhartruhari Mahtab was conferred as Outstanding Parliamentarian Award for 2017