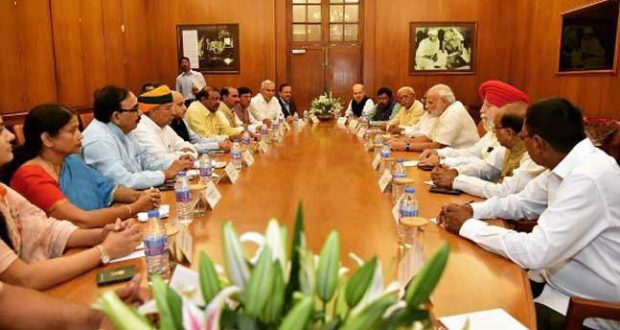 in National August 1, 2018 Comments Off on Centre Cabinet agreed to table the Scheduled Castes and Scheduled Tribes (Prevention of Atrocities) Bill 876 Views

New Delhi :1/8/18: Ahead of a nationwide bandh called by the Dalit groups, the Union Cabinet on Wednesday agreed to table the Scheduled Castes and Scheduled Tribes (Prevention of Atrocities) bill during the ongoing monsoon session of the Parliament to restore the original provisions of the Act, sources said.

The decision was taken during a Cabinet meeting chaired by Prime Minister Narendra Modi amid the deadline fixed by Dalit organisations and LJP (Lok Janshakti Party) to overturn the ruling of the Supreme Court in the matter.

The LJP, which is an ally of the Bharatiya Janata Party (BJP) also threatened to join ‘Bharat Bandh’ protest of August 9 called by the Dalit outfits against the ruling of the top court.

Goel is one of the judges under which the judgment of diluting provisions of the SC/ST Act was passed.

The Supreme Court in a March 20 ruling had barred immediate arrests in cases registered under the SC/ST Prevention of Atrocities Act.

The SC/ST Act protects the marginalised communities against discrimination and atrocities.

The verdict was widely criticised by the Dalit organisations and the Opposition who claimed that the dilution of the Act will lead to more discrimination and crime against the backward community.

On April 2, Dalit organisations across the country staged a massive protest against the judgment of the top court.

Later, the Centre filed a review petition against the ruling, which went in vain as the top court refused to stay its order and asked all parties to submit detailed replies.