Top Headlines
Home » National » Next general elections is scheduled to be held in the April or May 2019. 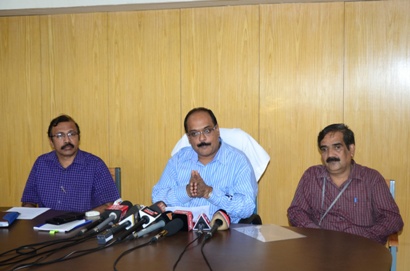 Next general elections is scheduled to be held in the April or May 2019.

Bhubaneswar:31/7/18:Odisha’s Chief Electoral Officer (CEO) Surendra Kumar today said the Election Commission of India (ECI) has been preparing to conduct the next general elections in the April or May 2019.

Kumar said this while replying a question whether there is possibility of holding early elections in the state and the country.

“I am not authorized to make any comment on whether to hold early polls. But, I can say that we have been preparing for conducting elections for Lok Sabha and Odisha Assembly in April or May 2019,” Kumar told reporters here.

Kumar also informed that the final voters list for the next elections in the state will be published on January 4, 2019.

Stating that the preparedness for the next elections is on full swing, Kumar said that the necessary arrangements are being made as per the schedule fixed by the ECI.

He said the process for the special summary revision of the voter list and publication of draft voter list will start from September 1 while objections will be heard by October 31, 2018.

Kumar also said that inclusion and exclusion of voters in the list would be allowed till October 31. He said the youths who attain the age of 18 on January 2019, may register their name in the voter list in October, 2018.

He said the number of polling booths for the next elections is likely to go up by at least 1,800 to 2,000 for the upcoming polls in the State.

Kumar also said that the ECI has declared this year as ‘Sugam Matdan Varsh’ or accessible elections for all. Therefore, he said, steps are being taken to ensure that people with disabilities get enrolled and get facilities at booths to vote easily.

2018-07-31
Editor in chief
Previous: Bhitarkanika National Park will be reopened for tourists from 1st August
Next: President of India presented the Outstanding Parliamentarian Award