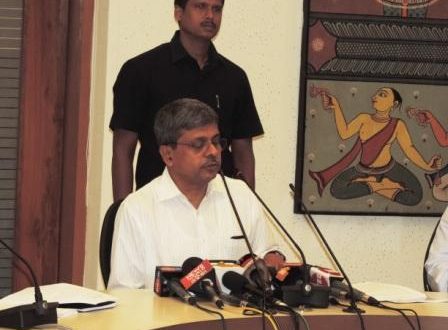 Bhubaneswar:30/7/18: The Odisha Cabinet on Monday approved the food security scheme of the state government to include the poor, distressed and eligible beneficiaries who have been left out under the National Food Security Act (NFSA) according to the Central government guidelines.

Briefing mediapersons after the meeting, which was presided over by Chief Minister Naveen Patnaik at the State Secretariat here, Chief Secretary Aditya Prasad Padhi said according to 2011 Census, the rate of population growth in Odisha was 14% in the last decade. The rate of growth translates to an increase in population by 10.22 % compared to 2011. “The approximate population of the state in 2018 is 4,62,63,983. If the same percentage of 78% coverage (NFSA) is followed, then there is a shortfall in the coverage,” he pointed out.

Padhi further said that the Centre has not considered the request of the state government to increase the beneficiaries’ upper ceiling. Chief Minister Naveen Minister had also written to Prime Minister Narendra Modi urging him to increase the target by 34.44 lakh under the NFSA, he added.