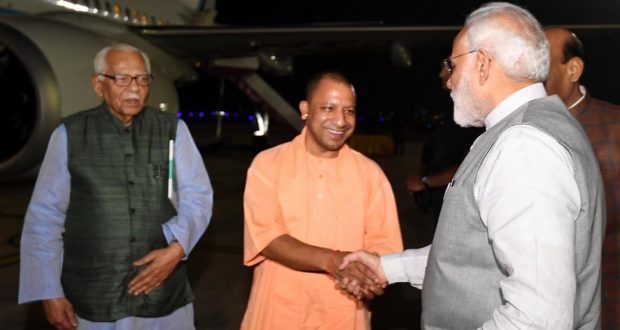 These projects have materialised within a few months after the UP Investors Summit, which was organized in February 2018, in an effort to attract investments and promote industrialisation in the State.

The Prime Minister referred to the heavy rain in some parts of the country. He said the Union Government is monitoring the situation and working with the State Governments to provide assistance to all affected people.

He said that as a caring government, the objective is to ease the difficulty in the lives of people, and improve ease of living. He said that the gathering today is part of the effort to transform the State of Uttar Pradesh. He said the speed with which these projects have moved (from proposal to groundbreaking) within five months, is outstanding.

He congratulated the State Government for this achievement. He noted that these projects are not restricted to certain parts of the State, but will enable balanced development.

He praised the new work culture of the State Government. He said the changed investment climate in the State is bringing opportunities for employment, trade, good roads, adequate power supply, and a bright future. He said these projects would provide many new employment opportunities, and benefit various sections of society. He said that flagship programmes such as Digital India and Make in India, would receive a big boost through these projects.

The Prime Minister said that three lakh Common Service Centres spread across the rural areas today, are transforming lives in the villages, by enabling efficient and transparent service delivery.

The Prime Minister said that the Union Government is ending silos, and focusing on solutions and synchronization.

He said India has become the world’s second largest producer of mobile phones, and Uttar Pradesh is leading this manufacturing revolution.

The Prime Minister said that as infrastructure projects get completed, it will become even easier to do business in India, and expenditure incurred on logistics will reduce. He urged entrepreneurs and traders to move towards digital transactions.

The Prime Minister outlined the steps taken to improve electricity supply in the country. He said the country is moving from conventional energy to green energy, and Uttar Pradesh will become a hub of solar energy. He said India’s energy deficit has reduced from 4.2 percent in 2013-14, to less than one percent today.

The Prime Minister said that the roadmap for New India, is the fulfillment of the aspirations of its people, through Jan Bhagidaari (people’s participation).