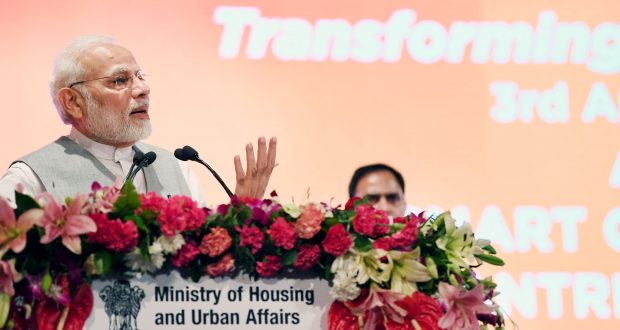 The Prime Minister visited an exhibition on Flagship Missions of Urban Development. He interacted with 35 beneficiaries of PMAY (U) – one from each State/UT.

He received feedback from PMAY beneficiaries, via video link, from different cities of Uttar Pradesh.

He laid the Foundation Stone for various projects under Flagship Missions, in the State of Uttar Pradesh.

Addressing the gathering, the Prime Minister said that urban administrators present in the gathering, are representatives of the cities which symbolize the hopes and aspirations of New India, and the new generation.

The Prime Minister noted that under the Smart City Mission, projects worth Rs. 7000 crore have been completed, and projects worth Rs. 52,000 crore are under implementation. He said this mission aims to provide the lower, lower middle and middle class with better civic amenities, and make their lives simpler. He said Integrated Command Centres are an important part of this mission. He said these Centres have started functioning in 11 cities, and work is underway in many more cities. 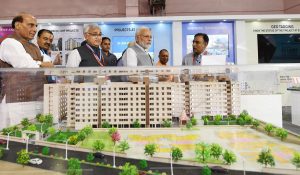 Recalling the efforts of former Prime Minister Atal Bihari Vajpayee, Shri Narendra Modi said that the vision to Transform the Landscape of Urban India is closely connected with Lucknow, from where Shri Vajpayee was an MP.

Appreciating the various initiatives taken by Shri Atal Bihari Vajpayee, the Prime Minister said that the Union Government has worked to augment the speed, scale, and quality of living, keeping the spirit of those initiatives intact.  He said the Government wishes to provide Housing for All by 2022. Giving statistics, the Prime Minister explained how a lot of work has already been done in this direction. He said the houses being made today have a toilet and an electricity connection. He said these houses are also a symbol of women empowerment, as they are registered in the name of women.

Responding to recent criticism, in an impassioned statement the Prime Minister asserted that he is a partner for the poor and underprivileged; the farmers and the jawans, in their misery and hardship; and wants to decisively end their suffering.

The Prime Minister said that India once had well planned urban spaces. But lack of political will, and clear thinking, especially after independence, had caused immense damage to our urban centres.

2018-07-28
Editor in chief
Previous: Odia actress Tamanna Vyas has been selected in the Top-10 list of the Miss Diva 2018
Next: PM attends groundbreaking ceremony of various projects in Uttar Pradesh