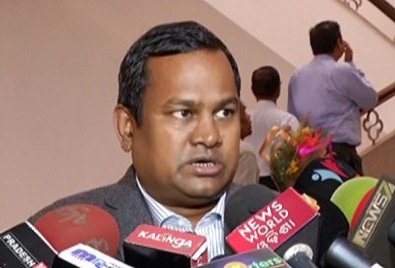 in State News July 22, 2018 Comments Off on Odisha government has urges no flood-like situation in any part of the state 841 Views

Bhubaneswar:22/7/18; The Odisha government on Sunday said there is no flood-like situation in any part of the state despite incessant rain.

“The water level of the major rivers is receding. There is no threat of flood-like situation in any district,” said Special Relief Commissioner (SRC) Bishnupada Sethi, adding District Collectors have been instructed to keep a close watch on the water level of the rivers.

He said one person of Kalamati village in Sambalpur district died after being swept away by floodwater, while another person died due to snakebite in Taraba block of Sonepur district.

Informing that many parts of the state experienced very heavy rainfall in last 24 hours, he said average rainfall of the state recorded on Sunday is 81.3 mm.

“A rainfall of 622 mm has been recorded on July 22 at the Master Control Room of Hirakud Dam Project located at Burla, Odisha. This is the highest ever rainfall recorded in any station in Odisha as ascertained from the India Meteorological Centre, Bhubaneswar.

“This has crossed the previous highest rainfall record of 581.9 mm recorded by the IMD’s rain gauge station at Sambalpur on August 19, 1982,” said Sethi.