Top Headlines
Home » National » Culture is a way of life and Religion is a way of worship: Vice President 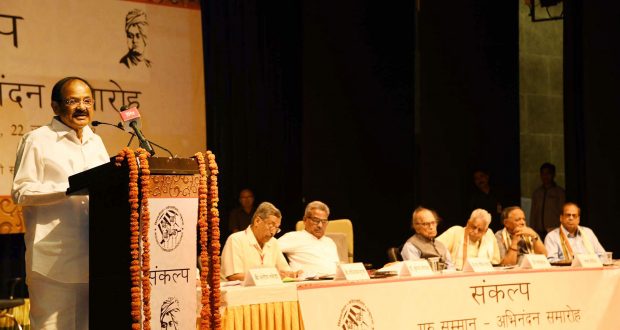 at Guru Samman - Abhinandan Samaroh, organised by Samkalp, a Project by Jan Kalyan Shiksha Samiti, in New Delhi on July 22, 2018. The former Governor of Jammu and Kashmir, Shri Jagmohan and other dignitaries are also seen.

Newdelhi:22/7/18;The Vice President of India,  M. Venkaiah Naidu has said that the Culture is a way of life and Religion is a way of worship. He was interacting with the members of ‘Youth For Bharat’, who called on him, here today.  The Vice President said that one should remember five things in their life – Mother, Mother tongue, Birth place, Motherland and Teacher who gave knowledge. One should try to talk in mother tongue at home. A public leader should be familiar with as many languages as possible, he added.

The Vice President advised the Students to dream high, aim high and work hard to achieve them. He further said that to achieve those dreams, you can afford to do some sacrifices. Everyone must have some aim in their lives, he added.The Vice President said that India was once known as “Vishwa Guru” with all those seeking knowledge from across the globe flocking to our ancient seats of learning like Nalanda and Takshashila Universities. Following various invasions and colonisation, India lost its pre-eminent position. Now the time has come for India to regain its position as a “Vishwa Guru”, the centre of educational excellence, he added

The Vice President said that people should be judged, should be selected, and should be elected on the basis of character, calibre, capacity and conduct but not on the basis of caste, cash, community and criminality. He advised the students to spare some of their time towards social activities, particularly towards downtrodden and underprivileged sections of the society. Sharing and caring should be the core philosophy of our life, he added

2018-07-22
Editor in chief
Previous: Three chariots-Nandighosa, Taladhwaja and Darpadalan have been surrounded by knee-deep water
Next: Indian students perform well at the International Biology Olympiad